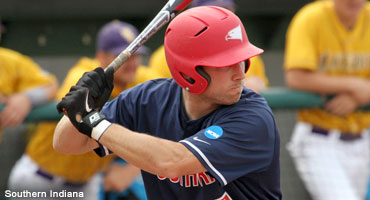 Tampa rolled through the regular season last year, compiling an inconceivable 51-2 record en route to the D-II Championships and an opportunity for back-to-back national titles. While in Cary the Spartans eliminated a pair of teams, but they were also handed two one-run losses to have their record-breaking season end short of their seventh national championship.

Nevertheless, it would be ludicrous to call the season anything but a success. The Spartans completed the season with a school-record .931 winning percentage, which included a remarkable 22 wins against nationally-ranked teams. They were the runaway winner of both the Sunshine State Conference title and the NCAA South Region. The Spartans pretty much won everything short of the national title.

Unfortunately for their opposition, much of the same should be expected from UT this season. Coach Joe Urso’s embarrassment of riches is repeating itself once more as the perennial powerhouse looks to be just as impressive this year as last. For every player lost due to graduation or the draft, another has taken their place like some sort of hardball hydra.
With that being said, the Tampa Spartans are the Perfect Game preseason pick for top team in NCAA Division II baseball.
The Spartan offense, which last season scorched opposition for a .329 batting average and 7.01 ERA, is loaded once again. Stephen Dezzi was one of eight finalists for the Tino Martinez Award for the most outstanding player in D-II baseball and will be back on the diamond once again. He’ll be rejoined by former Florida State shortstop Giovanny Alfonzo and Nick Tindall, UT’s leader in home runs last season and the GLVC Player of the Year in 2013.
New to the roster are a pair of top D-II pro prospects in Keaton Aldridge and Nick Flair. Aldridge is a rising star who decided to finish his college career at Tampa after starting his studies at the University of Memphis. Flair is a third basemen who has played and excelled at Mississippi State and Gulf Coast State.
The Tampa pitching staff will be just formidable with Trey Oest and David Heintz back as starters. The duo went a combined 19-0 last season and only walked a total of 27 batters in 169 1/3 innings while striking out 119. Joining them on the staff will be Dylan Barrow, who sat out last season while redshirting. Barrow was drafted by the Yankees in the 25th round last year and was named a top 20 JUCO prospect in 2013.
The defending national champion Southern Indiana Screaming Eagles are in good position to take home the title once again as well, but will need some help. USI has captured two of the last five national championships and would be the first team since Tampa to win back-to-back titles since Tampa in 2006-07 if they’re able to replicate last season’s success.
The “Screagles” return seven regular starters including pure hitter Kyle Kempf who not only hit for both average and power, but also had an incredible 11 outfield assists along with 23 stolen bases. Another notable player back in Evansville is All-GLVC and D-II Championship Series MVP Matt Chavarria. Chavarria is a senior shortstop/closer who finished with 14 saves last season, including two in Cary (along with a win in the title game).
The only question mark for USI will be their pitching. USI needs to revamp their starting pitching after graduation took a toll on some of their experienced arms.
Another primary contender this season are the Seton Hill Griffins. SHU made their first trip to the D-II Championships last season and return nearly their entire roster and pitching staff. Included in their five NCBWA Preseason All Region honorees is senior second basemen Pat McCarthy who missed last season due to an auto accident. In 2013 McCarthy hit .397 with a team-leading 35 stolen bases. Fellow senior Nick Sell has put up prolific numbers each of his previous three years on campus and was one of just seven non D-I players on the Golden Spikes watch list last season.
The Griffs have some daunting pitching arms as well. Mike Bittel finished his sophomore season with a 9-2 record and a 1.82 ERA and closer Jess Cooper set a school record with 17 saves.
There are several teams in the Preseason Top 25 who are anticipated to have big seasons despite not finishing in the rankings last season. Among them are Emporia State, Franklin Pierce, Trevecca Nazarene and Dixie State.
The Emporia State Hornets have prognosticators buzzing as ESU returns six position players who made at least 30 starts as well as their top three starting pitchers in ERA from a team which went 42-19 last season, won the MIAA Tournament Championship and advanced to the NCAA Central Region Championship game.
Franklin Pierce has been to the D-II Championship five times in the past 10 years and is the unquestioned favorite to advance from the East Region once again. The Ravens return seven regular starters from a club that tied finished for first in the NE-10 and have one of the best pitching staffs in the nation. FPU pitchers struck out 547 batters in 465 2/3 innings last season and that ratio will likely improve this season as the staff continues to develop under acclaimed Head Coach Jayson King.

Trevecca Nazarene completed one of the best seasons in program history last season and has won the first two G-MAC regular season and tournament championships. The Trojans are eligible for the NCAA D-II postseason for the first time this year. After finishing their season in the NCCAA World Series last season, TNU has a strong chance to advance to the D-II Championships this year with a roster full of seasoned talent led by Tyler Tichenor who rapped out 101 hits last season and batted .429.

Dixie State will battle Cal Baptist for the PacWest title and is on the short list of favorites to emerge from the West Region. DSU has three players on the NCBWA All-West Region team and will be have transfer hurler Porter Clayton on the roster.

Clayton was drafted by the Yankees in the 21st round last June, but passed on the opportunity to play professionally to hone his skills in St. George. Clayton pitched two seasons at Oregon; the first being in 2011 before taking two years off for a church mission, only to return last year to appear in 20 games for the Ducks. He, along with the über-athletic Trey Kamachi give Coach Chris Pfatenhauer two of the top 20 professional prospects in D-II baseball.

2015 marks a pretty unique year for Division II baseball given the presence of two power arms, Cody Ponce and Josh Staumont, that both have first-round type upside in regards to the 2015 MLB Draft. Cody Ponce is considered a near-lock to go in the first round, and both performed at a high level in the Cape Cod League last summer.

Here’s Frankie Piliere’s report on Cody Ponce, who was named PG’s No. 2 overall prospect on the Cape last summer:

The Cape Cod League All-Star game served as a cherry on top of a breakout summer for Cody Ponce, as he showed flashes of absolutely brilliance throughout his summer, but in this game put all the separate pieces together to form a pitching prospect that some scouts pulled out Roger Clemens comparisons for. Ponce attacked hitters with a 93-96 mph fastball in his All-Star outing, and showed the wipeout, plus slider he had used only sparingly at times throughout the summer. For much of the summer, it really did depend when you saw Ponce when it comes to just what your evaluation was of him. He didn’t always show that plus 85-89 mph slider that he broke out in a big way in the All-Star game, and his 79-82 mph curveball flashed big plus 11-5 depth in some games, but didn’t show up quite as sharp in others. His solid-average changeup was a constant for him at 81-83 with late fading action, however. But, if nothing else, Ponce proved he has different gears he is capable of reaching for. In one particular mid-season performance, the 6-foot-5 righty was living at 91-93 mph – that is until he got in trouble. With runners on, he threw two 96 mph fastballs, followed by a 97 mph fastball to finish off a dangerous Orleans hitter in Bobby Dalbec. In other words, this is an arm who has an idea on pacing himself and holding some extra bullets in reserve. Ponce is going to have to improve his command consistency and find ways to bring the entirety of that four pitch arsenal with him to the mound everyday, but his size, easy righty arm and potential for three plus offerings make him a potential frontline starter if things break right. At worst, he has an attack mode mentality, the demeanor, and clearly the electric stuff to pitch at the end of games. We may just be seeing him scratch the surface of his ability.

And here’s the report on Josh Staumont, ranked 25th:

If there was a title to be given for most fascinating pitching prospect on the Cape, Josh Staumont would be the slam dunk winner. Staumont has a mountain of talent, but with that being said, there will need to be a steady diet of refinements made to his game. In one specific outing against the Wareham Gatemen, Staumont’s first two pitches registered at 96 mph. In that same inning, his velocity dipped as low as 88 mph, but lived mostly at 93-94. Staumont will have to find a velocity level where he can comfortable locate and repeat his mechanics. His arm works extremely well, and with more innings there does not appear to be a glaring a reason why he won’t be able to maintain that mid 90s velocity through a game. If he can keep his glove arm up and pull down rather than side to side, that should also help his command. The same has to be said for his 76-80 mph curveball, which flashed big, sharp depth, but was also inconsistent throughout his outing. He also will flash a changeup. The good news is that the late in the summer, the velocity began to live more consistently at 95-97 mph and his command took strides in the right direction.

A projectable 6-foot-3 righthander, Olson showed good life on his fastball at 87-90 mph. He mixes a tight 78-80 mph slurve that he will use against righties and lefties. His 78-81 mph changeup is a pitch he’s still developing and tends to throw across his body.

Porter has travelled an unconventional path in arriving as a top lefthanded prospect for the 2014 draft. One of the nation’s leading two-way talents four years ago at an Idaho high school, Clayton elected to take himself out of the 2010 draft by enrolling at Oregon a semester early, and worked in only 17 innings there as a freshman before embarking on a two-year Mormon mission. He returned to the Ducks last fall and pitched sporadically initially as he shook off considerable rust, but worked with more conviction later in the spring and soon began drawing waves of curious scouts. Though Clayton assembled just a 2-1, 4.65 record through his first 18 outings (5 starts), with 45 base runners (23 BB/22 H) and just 19 strikeouts 31 innings, scouts have shown a willingness to overlook an indifferent performance, along with an inconsistent delivery and arm action, because of Clayton’s impressive physical stature and the considerable promise in his left arm. His fastball, 88-90 at the start of the spring, was a steady 88-91 mph towards the end, and topping at 93. The ball was coming out of his hand increasingly easier and he should only to continue throw harder as he refines his mechanics and firmly gets his feet back on the ground. Clayton’s breaking ball also has shown rapid gains, and his change should be a future out-pitch.