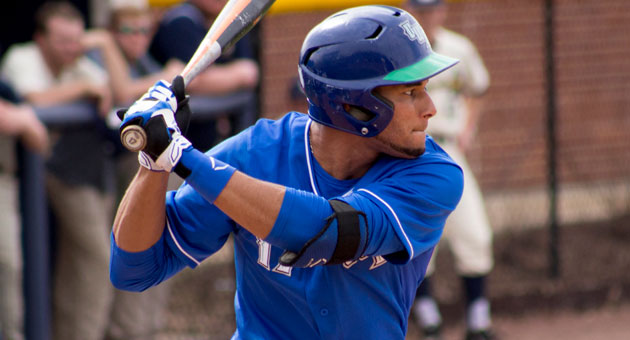 Despite plenty of opportunities for upheaval, there wasn’t a whole lot of moving and shaking in the latest small school updates.

All three of the top teams lost a game last week, which was the first time that’s happened all season – albeit the rare occurrence had much to with with the fact that D-II’s St. Cloud State hadn’t been bested in a game all season. The losses by SCSU and NAIA’s Georgia Gwinnett were forgivable, but the defeat by Cortland State in D-III was the straw that broke the camel’s back for the Red Dragons who haven’t been playing quite up to snuff the past couple of weeks. With the loss Cortland took what could be seen as a plummet to seventh in the rankings; however to their credit the separation between them and the rest of the top teams is paper thin.

As is apropos with this time of the season, the upcoming week is filled with more potential ranking shake-ups.

Top-ranked SCSU will face Concordia St. Paul and Augustana, in what will unquestionably be their toughest test of the season. The Huskies are slated to play a half dozen games against the pair are a combined 18-1 in the NSIC. The Huskies likely need to earn at least four wins in the series to safety keep their season-long stranglehold on the top spot.

The NAIA leaders Georgia Gwinnett plays single game contests against two teams in the top 10 as well as the No. 1 team in D-III. The Grizzlies’ game against Faulkner, the third-ranked team, is the most crucial of the three. If the Eagles are able to avenge a loss from a late last month, Faulkner could dethrone GGC and reclaim the No. 1 position.

Emory, the new No. 1 team in D-III, probably has the most leeway of the three when it comes to holding onto their position. It’s difficult to put too much stock in their aforementioned game with the Grizzlies since the schools play at different levels. The Eagles also host Oglethorpe, which is a more meaningful game. The Petrels have already upset one top 10 opponent this season in Birmingham-Southern and would love to add another big win to their results.

Rankings are based on games through Sunday, April 10.

Following a game in which the Huskies tied a school record with their 23rd consecutive win and hammered eight home runs in a 19-0 laugher over Upper Iowa, the Peacocks surprisingly handed SCSU their first loss of the season in a 3-1 setback. Despite the loss, the Huskies still securely held onto the top spot. It’s easy to overlook a loss when the team is outhitting opponents by .176 points (a number I had to triple-check to believe) and a team ERA 8.70 runs lower than their opposition (a number I had to quadruple-check to believe). The rest of the top five stayed the same as they went a combined 15-2 on the week.

A big move was made by West Florida as the Argos won their eighth consecutive weekend series. UWF hasn’t been felled since they were nipped their first two weekends of the year when they were barely bested by Florida Southern and Tampa, two teams which are solidly sitting in the top half of the rankings. With their series win over West Florida, the Argos jump back into the top 10, their preseason position.

The Argos have a top 10 pitching staff which currently boasts a 2.74 ERA and has tossed a half-dozen shutouts on the season. This week they’ll face perhaps their toughest test of the season when they face rankings outlier Delta State. The Statesmen are leading the Gulf South Conference in batting at .343 and have averaged 13.5 runs in their past six wins. A series win by UWF would give them the inside track for the conference regular season title, while a pair of wins by DSU would give the Statesmen the boost they need to make their first Top 25 appearance of the season.

No team has been better than Nova Southeastern since mid-March which has propelled the Sharks back into the Top 25. NSU ran their current win streak to 12 with a win over the NAIA preseason No. 1 team, St. Thomas, and a sweep of Palm Beach Atlantic. Since March 15 NSU has gone 14-1 with quality wins over Southern New Hampshire, Tampa and St. Leo.

The Sharks’ resurgence is thanks in large part to junior sluggers Daniel Zardon and Brandon Gomez. The pair played on D-I clubs last season (LSU and Florida International respectively) and have found their stride for NSU as they’re batting a combined .335 with 23 home runs. This past weekend the duo went 15-for-29 and each had a home run in their sweep of the Sailfish.

The team that started NSU’s ratings resurgence had a big jump in the rankings this past week as well. Southern New Hampshire has won their past eight games and will be looking to even their season series with Franklin Pierce as the two NE-10 powerhouses play a midweek matchup. The two clubs are currently third and fourth in team ERA.

The club topping the nation in ERA, California Baptist, continued to be the best in the west as they won three of four against Concordia. The PacWest leaders have this week off before taking to the field against Point Loma at the home stadium of the Anaheim Angels.

Continuing to hold the top spot in the NAIA rankings will be an arduous task for Georgia Gwinnett as they face an unenviable schedule the next two weeks. This week the Grizzlies face third-ranked Faulkner before hosting seventh positioned Auburn Montgomery and the top team in D-III, Emory. In the week following GWC hosts South Carolina-Beaufort who currently sits in the fourth place position in the latest rankings.

After making their rankings debut last week, William Carey made a seven position move after their second head-turning weekend. After taking two of three from Faulkner to start the month, the Crusaders won a series over Auburn Montgomery this past weekend. WCU also had a series sweep over Missouri Baptist, which makes them a team to watch headed into the postseason.

When WCU advance to the twilight innings of games, the Crusader staff has dominated opposition. Relievers Lane Fazed and Kyle Deckwa have made a combined 30 appearances and have held opposition to a sub .200 batting average. They hold down a pitching staff which has a team ERA of 3.49 compared to the 8.25 they’re hanging on competition.

Teams going to opposite direction include Keiser who plummeted 12 spots to 21. It’s been a horrible, horrible couple of weeks for the Seahawks who were once ranked in the top three teams. KU has gone 3-9 over their past dozen games with their only wins being over an Ave Maria club which is 16 wins under .500 and in the midst of an 11 game losing streak. Kaiser slugger and preseason Golden Spikes Award watch lister Keivan Berger has continued to bash the ball as he’s hitting .409 with 27 extra-base hits.

Two teams are new to the NAIA rankings, Middle Georgia State and York.

MGSU makes their debut after sweeping Loyola. The Knights don’t have a lot of big wins so far this season, but they have a bunch of near-big wins which are impressive. MGSU has single run losses to Faulkner, South Carolina Beaufort, William Carey and Auburn Montgomery. Those near misses, combined with a plethora of wins on the rest of their schedule, allow Middle Georgia State to make their rankings debut.

York earned their initial rankings appearance as well after a battle with Tabor. The two teams traded wins and losses and split the big series, which kept the pair atop the KCAC standings. The Panthers’ team ERA is robust at 5.07, but with a powerful offense led by Ivan Perez, who is batting .433 on the season, and Nick Carney, who tops the team in home runs, and a rest-of-the-lineup which has over 100 stolen bases, they can survive giving up an extra run or two here or there.

At the lower half of the rankings the Jamestown Jimmies continue to pile up wins. They added another three wins last week and have a second-best .925 winning percentage. They’ll host Viterbo this week which should be four easy wins as they try to hold off Bellevue for the top of the North Star Athletic Association standings.

For the first time this season a club other than Cortland State is on top of the D-III rankings. Emory went 4-0 with a second win over Birmingham Southern for the second time in just over a week to usurp the No. 1 position from the Red Dragons. Emory also held NC Wesleyan to a single run in a pair of games and mercy-ruled them in a third game to complete their winning week.

Each of the Eagles’ four regular starters have sub 2.00 ERAs and the team as a whole comes in at a 2.29 mark which puts them third in the nation. With so many able arms on the staff it’s hard to say which Eagle is the ace, but it would be hard to argue against Jackson Weeg earning the title. After winning a first in the nation 12 games last season with a 2.59 ERA, Weeg is a perfect 6-0 in 11 appearances and has a team-leading 51 strikeouts with a 1.97 ERA.

The formerly No. 1 team, Cortland State, still look formidable, but haven’t looked quite as sharp on the mound the second half of the season. After starting the year 12-0, Cortland has gone 10-5 and last week had a loss and a one-run win over SUNY Oneonta, a team with a 3-17 record on the season. The Dragons drop from first to seventh; however it must be mentioned that the difference between the top seven clubs is extremely slight.

It was big week for Southern Maine who had started the season with a disappointing 7-5 record. Last week USM won six games to stop their downward slide and head back to their top 10 preseason prediction. The reigning D-III Player of the Year, Sam Dexter, has been a big part of the Huskies’ resurgence. He’s batting .423 with a team-leading 15 extra-base hits and has played flawless defense at shortstop. Kudos also need to be heaved upon Sam Stauble, who earned Little East Conference Player of the Week honors. For the season he’s batting .563 with 36 hits in 64 at-bats and has hit safely in 16 of 17 games.

It was a short stay in the rankings for Buena Vista and McDaniel who had joined the rankings last week. They both played their way out of the Top 25 to make way for Cal Lutheran and Misericordia, two teams who had spend time in the rankings earlier this season. Also entering the Top 25 this week is Wartburg who had handed the BVU Beavers three losses in four games last week.