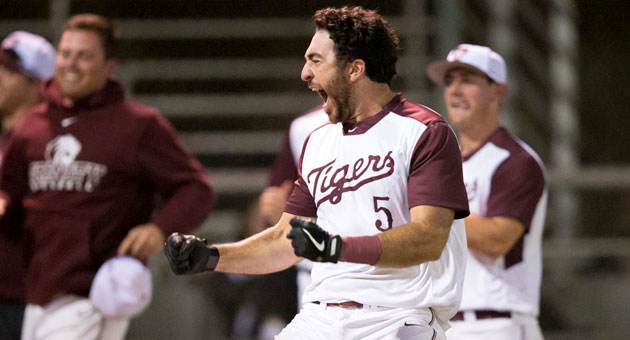 Heavy is the head that wears the crown.

When you’re the No. 1 team every series is an event. Teams are always bringing their best to topple a top-ranked club and there’s no rest for the team that has the (1) signifier before their name on the schedule. When you’re the No. 1 team there is always a target on your chest as other schools are looking to ascend to that spot themselves or looking for a signature win to lock up a place in the postseason.

For the most part this season the No. 1 teams have always been able to play up to the level the top ranking signifies. The top-ranked team has often secured their spot for weeks at a team and there’s hardly been any one-and-done appearances at the top of the rankings table. As such, there hasn’t been any weeks this season when all three small school top-ranked teams turned over. That is, until now.

There is a new No. 1 team in each of the three rankings. With that changing of the guard for the D-II, NAIA and D-III clubs, one previous No. 1 team has regained the premier position, and for the other two, an unaccustomed club has ascended to the titular ranking.

Rankings are based on games through Sunday, April 17.

The quality of competition finally caught up with St. Cloud State. Aside from their opening weekend of the season in which they played a single game against Central Missouri on a neutral field, the Huskies haven’t faced anyone currently in the Top 25, or even in that neighborhood. Despite the second tier schedule SCSU had remained atop the rankings throughout the season. This was because the Huskies where absolutely crushing their opponents; they weren’t squeaking by, they were absolutely annihilating them, depantsing and spanking them by scores such as 21-4, 18-3, 21-0 and 19-0.

This week was to be their proving ground. Six games against Concordia St. Paul and Augustana, clubs which were a combined 18-1 in the NSIC and both were in the top eight of the übercompetitive central region.

With the two teams being in the good-but-not-great category, the Huskies were going to be given a little leeway with losses. Had SCSU dropped only a pair of games yet looked impressive in the remaining four, they’d still be tops, but their play was, like their opponents, good-but-not-great. SCSU split a doubleheader with CSP and the series with the Vikings. All six games were played on the Huskies’ home turf.

With the losses the door opened for a new team to take the top spot. The decision to choose the new No. 1 wasn’t an easy one. Millersville was the heir apparent as they were second in the rankings; however like SCSU, their schedule this season hasn’t been exactly a murderer’s row of opposition. The Marauders do have nice single game victories over Seton Hill, Francis Marion and Le Moyne, but none of them are, or have been, ranked this season. Aside from them the rest of the schedule has been rather, “meh”.

MU has an impressive 3-1 series win over East Strodsburg which has been their pièce de résistance so far and is a pretty gosh darn good rankings résumé highlight.  The Warriors have been ranked all season and the powerful ESU club, which has a .540 team slugging percentage, was held to only five total runs in three of the four games by Millersville pitching. Surprisingly the only game ESU was able to win against MU was against their ace and pro prospect Brandon Miller. With those wins Coach Jon Shehan’s club is this season’s second No. 1 ranked team.

The Marauders edge out resurgent Tampa and St. Edward’s teams, as well as perennial powers and D-II CWS vets Frankin Pierce an Colorado Mesa. Despite their losses last week, SCSU should still be considered to be on the short-short list of top teams.

In the NAIA Georgia Gwinnett has been in a similar situation as SCSU, but to a lessor degree.

Like the Huskies, the Grizzlies haven’t had many marquee matchups on the schedule this season either. A four-game sweep of Keiser was their most impressive overall performance to date; however the Seahawks, who were once ranked second in the nation, have been taking a dive as of late and the wins over KU don’t quite carry the weight they once did.

GGC also had a win over Faulkner earlier this season, but that victory was negated last week when the Eagles avenged the loss with a vengeance. That defeat, combined with a loss at the hands of Auburn Montgomery, has bounced the Grizzlies out of the top position in the rankings this week – but just barely – for now. Gwinnett unquestionably needs to get some big wins to get back on track. They’ve lost their last three games against teams in the Top 25 and will need to look good, real good, against South Carolina-Beaufort this upcoming weekend.

With the Grizzlies drop to No. 4, Faulkner has once again reclaimed the No. 1 NAIA position. The Eagles have spent much of the season in the catbird seat, with signature wins over Missouri Baptist, Keiser, Davenport, Tennessee Wesleyan and now Georgia Gwinnett as a part of their spring performance. Although the Eagles have 10 losses this season, easily more than any other club in the top four, their losses have been legit. Seven of their 10 defeats have been against teams currently in the Top 25 to show that outscoring the Eagles is no easy task.

The Eagles jumped over the Bellevue Bruins, who have been the second-ranked team five of the past six weeks. As good as the Bruins have been lately (they’ve only lost twice in the past month) it will be hard for BU to usurp the No. 1 position. Bellevue doesn’t have much meat on their remaining schedule and will have to hope Jamestown continues to keep up their winning ways and get a chance to take them down a peg in the North Star Athletic Association tournament.

It would have been easy to overlook Emory’s loss last week to Georgia Gwinnett had the Eagles been competitive, but the Grizzlies handed them a 14-3 loss. That, combined with a defeat that the hand of Oglethorpe, drop Emory out of the D-III pole position. Filling that void are the Trinity Tigers who have spent the entire season in the top four.

The Tigers are this week’s No. 1, but they are just one of a number of teams that is arguably the best in the nation. Trinity, along with Emory and Cortland State – the two other teams which have been ranked first in 2016 – are all deserving of being labeled best of the best. It would be hard to argue with a handful of other teams too including Randolph-Macon, Birmingham-Southern or group of northern clubs which includes St. Thomas, UW La Crosse and Oswego. Southern Maine recently had a big week recently too. Come to think of it, it may actually be quicker to list which teams aren’t a No. 1 club candidate.

Nevertheless, Trinity is a praiseworthy choice to be the new No. 1. All eight of their everyday players are batting over .300 and the team as a whole has a slugging percentage nearly twice as much as opposition (.546 to .292). The club is led by Jeremy Wolf who is clubbing the ball at a robust .438 with 23 doubles and 10 home runs in just 144 at-bats. Trinity can also tout an absolutely filthy closer in Chris Tate. In a dozen appearances Tate has struck out 42 batters in 27 innings. He only has three saves, but considering the Tigers are outscoring opponents 431 to 278, it’s hard for him to get save situations.

A big shout out must be given to Concordia-Chicago who jumped back into the rankings after an incredible 9-1 week. The wins included a pair of victories over UW-Whitewater, the third-ranked team in the nation, and six of the victories featured double-digit run totals for the Cougars.