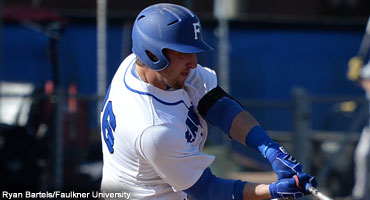 This week marked some important events in each of the three divisions. In D-II the last remaining team to be undefeated was dealt a loss when St. Cloud State dropped the last game of a four-game series to Augustana. Prior to the loss, the Huskies had compiled a school record 23-game winning streak. In NAIA, there was finally a changing of the top team when previously No. 1 Missouri Baptist lost a series to Park Univeristy. The losses dropped the Spartans to fourth overall, but MBU is still within a winning weekend of returning to the top spot. In D-III third-ranked Salisbury continued to have an unblemished record when they mauled Gallaudet to be a perfect 12-0. With the wins the Seagulls remained in a four-team scrum for the top D-III team.

Despite these big games and events, there were still countless other stories in the small school schedule. Teams across the country are crescendoing to the final stretch where every game counts as they jockey for standings supremacy and the opportunity to play in and host games during the postseason.

Rankings are based on games through Sunday, March 29.

Seton Hill stayed atop the D-II rankings this week after gaining control of the No. 1 position with the last update. The Griffs’ only action was a doubleheader against the IUP Crimson Hawks that SHU used to up their current win streak to double-digits. Unfortunately a midweek game with NAIA power Point Park was postponed as the contest with the Pioneers possibly could have been the best competition Seton Hill faced so far this season.

If things go according to schedule, SHU should be able to remain atop the rankings for the next couple of weeks as they won’t face any stiff competition until late April when they trade home game sets with Mercyhurst. With that being said the Griffs will be on a short leash and must take care of business on the diamond. They don’t have a lot of quality wins this season so they’ll have to make up for it with quantity.

A big matchup to watch this week takes place out west where Colorado Mesa hosts CSU Pueblo. The two teams are ranked third and 21st respectively and have a combined record of 52-6. The Thunder Wolves haven’t tangled with any ranked opposition yet this season so this weekend will be a good indicator to see if they are as good as their record indicates. The two teams are unquestionable the cream of the RMAC crop and have dominating pitching staffs that have team ERAs a full run and half less than anyone else in the conference. The experience and home field advantage should give CMU the edge and I personally like the Mavs to take the series.

A team that has been quietly compiling wins all season and hasn’t received much ink to date are the Alabama-Huntsville Chargers. At 23-4-1 UAH has one of the best winning percentages in the nation despite playing a rough slate that is filled with quality clubs. After extinguishing a red-hot North Alabama club last weekend, the Chargers steamrolled Miles College 22-2 on Monday and moved back into the top five with the wins.

A big part of the Chargers’ success has been a trio of pitchers who have been embarrassing batters all season. Starter Daniel Koger was honored Tuesday with his second GSC Pitcher of Week award after holding UNA to a .043 average over seven innings with 11 strikeouts last Friday. For the season Koger is 7-0 with a 2.01 ERA and has fanned 56 batters in 53 2/3 innings. Koger has been a part of three shutouts this season, thanks to bullpen aces Luke Mould and Mitchel Wright. The tandem have been dominating during late the late innings, limiting opposition to a combined .171 average with 60 strikeouts in 56 1/3 innings with only 12 walks.

Two teams re-entered the rankings after dabbling in the Top 25 earlier this season. After dropping its first seven games of the year, the Storm has won 20 of the last 21 games.

UNC Pembroke is also back on the heels of back-to-back sweeps of Georgia Southwestern and Young Harris. UNCP’s Collins Cuthrell has been an absolute monster for the Braves this season, posting stats that makes one double and triple check their validity because they’re so crazy insane. Last year Cuthrell’s highlights while playing at Barton included the drawing six walks (albeit he was injured for most of the season). This year he is batting .473 with 18 home runs and 17 doubles for a 1.015 slugging percentage to lead the Braves.

Top ranked Missouri Baptist lost two of three at Park and subsequently dropped out of the No. 1 position for the first time this season. The top spot was Oklahoma Baptist’s for the taking as they were undefeated going into the weekend and had a midweek win over Tabor, but the Bison lost a series to rapidly rising Oklahoma City. As a result, the new team at the top of the NAIA rankings is the Faulkner Eagles.

Faulkner has been in the top three all season, and unquestionably would be deserving of the top spot even if the two teams ahead of them hadn’t lost (although as this column was being completed they dropped a game to Reinhardt). The Eagles have wins against six teams that have been ranked at some point of the season and have several more contests scheduled against highly regarded competition as the season continues into April.

The aforementioned Oklahoma City Stars entered the top ten 10 week after their series win over OBU. The Stars were one of the last teams left out of the preseason rankings, ultimately bumped after deciding that they had lost too much of their pitching staff to the MLB Draft and graduation. However OCU Head Coach Denney Crabaugh has been able to replenish his roster with new talent that has them once again among the NAIA elite.

Dustin Cook has been drafted three times but decided to come to OCU despite being picked by the Cincinnati Reds in the 28th round last spring. Cook has a 6-0 record and has gone the distance in four of his eight starts this season. His 0.89 ERA is a product of only allowing a scant 33 hits in 50 2/3 innings so far this season. Cook has been joined on the staff by fellow JC transfer Carlos Chavez. Chavez has been just as nearly dominating, fanning 63 batters in 47 1/3 innings and is 4-0 with a 1.52 ERA.

New to the rankings this week are the Auburn Montgomery Warhawks. AUM swept Belhaven on the road to take the Blazers place in the rankings. The Warhawks can really impress this week when the play the 13th ranked D-II team Columbus State and a respectable William Carey club who reached the 20 win plateau themselves this past weekend.

Cortland State only played a single game last week, so there wasn’t much of an opportunity for a challenger to usurp the Red Dragons from the top spot in the D-III rankings. Nonetheless, the No. 1 position is a hotly contested slot as the top four teams are a combined 66-5-1 with little separation between them.

Second ranked and defending national champion UW-Whitewater looks like they will be giving them a run for their money this week. The Warhawks earned two wins over previously top five ranked St. Thomas and also took swept a doubleheader from an always quality St. Scholastica team on Monday which didn’t figure into this week’s rankings. The Salisbury Seagulls and the one time top ranked Birmingham Southern Panthers also are in queue for the No. 1 spot after going a combined 9-0 last week.

New to the D-III rankings is surging Warburg College. After a lopsided loss to start the season, the Knights have gone 19-1 with their only setback being a one run loss. WC has out-homered opposition 26-5 on the season and their pitching staff has limited opponents to only 21 extra-base hits in 19 games. The Knights can cement their spot in the rankings this week when they travel to Buena Vista to play a four-game set with the Beavers who are 14-3 and are just outside of the rankings.