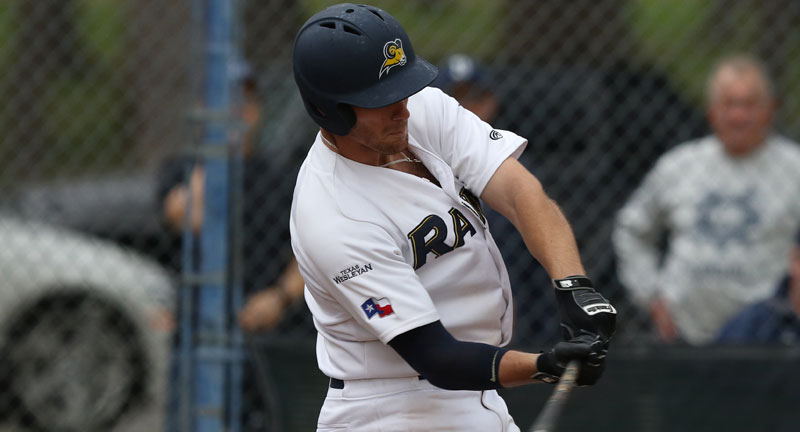 In addition to checking in on who the top small school teams are headed into the home stretch, this week’s rankings update checks in on who some of the top individual performers are in each of the three divisions. This includes a forecasting of who will be the top hitter, pitcher and most valuable player at the end of the season. With a month to play, including the crucial postseason, a lot of these honors are still up for grabs (except for D-II Player of the Year, Zack Shannon has that locked up).

If these players continue to crank out the numbers they have so far this season, they could not only lead their teams to an extended postseason run, but they could play themselves out of the college ranks and into the professional ranks based on their play this spring.

Rankings are based on games through Sunday, April 22.

Most Outstanding Player
Zack Shannon, Delta State Statesmen
Last season Shannon was the runaway winner of the Tino Martinez Award as D-II Most Outstanding Player.  He led DSU to the Division II Baseball Championships by hitting .434 with 19 home runs and 88 RBI. Those numbers were just a glimpse of what was to come as the Cincinnati native has somehow managed to dial it up to 11 this spring. So far this season Shannon is running away with two-thirds of the D-II triple crown, as his 27 homers are four higher than anyone else and his 79 RBI are 15 more than any other batter.  His .441 batting average is currently 10th in the nation. His prolific power has him slugging at an astonishing 1.050 with an equally amazing .537 on base percentage. Despite his powerful swing, he’s only stuck out 20 times.

Also considered: No one else is even close. Starting putting Shannon’s name on plaques, trophies and marble busts already.

Pitcher of the Year
Chris Vallimont, Mercyhurst Lakers
While first-rate, Chris Vallimont’s 2.33 ERA isn’t particularly dainty, nevertheless, his other pitching numbers are downright awe-inspiring. In 46 1/3 innings, the latest in a long line of Laker aces has only allowed 22 hits to limit opposing batters to an unfathomable .137 batting average. Yet, that statistic isn’t even the most impressive, not by a long shot. Vallimont has incredibly struck out 90 batters this spring to average a robust 17.48 per nine innings, which is tops among all the NCAA divisions and the NAIA. The last time a Laker put up numbers in that neighborhood was when current Seattle Mariner Dan Altavilla became one of the first players from his class to reach the Major Leagues.

Also considered: Tampa’s tandem of Mark Moclair and David Lebron have kept the Spartans in the top five of the rankings all season long. Combined they are 12-2 with six saves and have stuck out 176 batters in 114 2/3 innings. If UT makes it out of the über competitive South Region it would be hard to not give one of them the nod.  Charlie Hecht of Georgia College should deserve consideration too. His numbers on paper aren’t quite as shiny as the other players mentioned, but he throws in the offensive-friendly Peach Belt Conference and has still managed to keep his season ERA at 2.27 and is approaching triple digit strikeouts in only 79 1/3 innings. Cal State Stanislaus’ Joe Ryan has earned CCAA Pitcher of the Week honors five times this season. Currently the Warrior ace has a 1.58 ERA, is holding opposition to a .181 batting average with 108 strikeouts and only 13 walks in 85 1/3 innings.

Most Valuable Player
Logan Browning, Florida Southern Moccasins
Like Shannon, Browning received rare notice as a non D-I player to make it on the Golden Spikes Award Midseason Watch List. Browning is leading the top-ranked Mocs with a .476 batting average and has only struck out nine times in 103 at-bats. His 11 doubles and three triples also top the team. One the mound the son of the former Cincinnati Reds All Star has earned eight wins in 12 appearances while earning a 2.99 ERA in 72 1/3 innings. Either his offensive or pitching numbers alone would earn him consideration as D-II’s MVP headed into the postseason.

Also considered: Browning is a shoo-in, but mad props must be given to Colorado School of Mines’ Mickey Gangwish. The catcher became the school’s single season leader in the home runs and RBI (currently at 17 and 60 respectively) and is topping the team with a .405 average as they look to usurp Colorado Mesa in the RMAC.

Most Outstanding Player
Kiki Menendez, Texas Wesleyan Rams
Menendez is an easy choice as the NAIA’s most outstanding performer as he is currently topping the division in home runs (20), total bases (150) and slugging percentage (.949) and ranks among the top five in RBI and runs per games as well as fifth in batting average at .462. His production has been a big reason the Rams have been able to stay in the top half of Top 25 all year despite it being a tumultuous season for TWU off the diamond. Menendez recently had a school-record 21 game hitting streak which was extinguished in part due to a game being limited to seven innings.

Also considered: Despite playing one of, if not the, most imposing schedules in the NAIA, Georgia Gwinnett’s Walter Courseyhas managed to maintain a ridiculous .511 batting average. Those numbers also include eight doubles, five triples and a measly four strikeouts in 141 at-bats. He has also managed to steal 15 bases. Lane Milligan of Oklahoma City has been putting up some baffling numbers of his own. He’s hitting .490 with 13 triples and has batted in 70 Stars this spring.

Pitcher of the Year
Jonathan Bermudez, Southeastern Fire
Bermudez has earned the decision in each game he has thrown this season, earning the win in 12 of 13 appearances. In those outings he has kept his ERA down to a 1.71 mark while fanning 120 batters in 79 innings with only 26 walks. Earlier this spring he earned the first of back-to-back The Sun Conference Pitcher of the Week honors after striking out a program record 18 batters, but bested the performance soon after when he K’d 16 and faced the minimum when he fired a no-hitter against Warner.

Also considered: Despite pitching in a matchbox of a home diamond, Oklahoma Wesleyan’s Tyson Cronin has a 1.24 ERA, has thrown three complete games and is holding opposition to a .212 batting average. LSU Shreveport’s Renny Tolentino is a pitcher no one will hope to face with postseason elimination on the line. He has fanned 108 batters in 75 1/3 while only allowed 39 hits and compiling a 2.51 ERA for the Pilots.

Most Valuable Player
Nelson Mompierre, St. Thomas Bobcats
Mompierre transferred from the University of Missouri where he had led the Tigers in batting last season. His addition as the Bobcat’s backstop as been invaluable as St. Thomas has been cemented in the NAIA’s top three all season long. He is batting .426 and is second in the nation in doubles (22) and RBI (70) and is currently positioned fifth in slugging percentage. Last week he helped STU capture the The Sun Conference regular season title by going 5-for-7 with two runs, six RBI and a home run in the pivotal second and third games of the series.

Also considered: Reese Cooley is the top player on the top team as Faulkner has spent the entire season as the No. 1-ranked club. Cooley is batting .445 and leading the team in runs and home runs. Lyon has been a bit of surprise this season, starting the year unranked, but have been firmly entrenched in the middle of the rankings the past two months. A big part of their success has been the performance of Kylan Barnett who is hitting .384 with 25 extra-base hits.

Most Outstanding Player
Daytona Bryden, Wisconsin-Whitewater Warhawks
Bryden has wielded the biggest bat on the team destined for another deep run into the postseason. While the senior slugger’s numbers are a bit abbreviated due to UWW’s late start, what he has accomplished in the first 20 games is stunning. He’s currently batting .530 with 10 doubles, five triples and five home runs. The explosive Bryden also has 14 stolen bases and has hit for the cycle twice.

Also considered: Wooster’s Dan Harwood and Michael Wielansky both rank among D-III’s top statistical performers. While Harwood’s production is currently surpassing his teammate’s, Wielansky, the Valley Baseball League’s reigning MVP, also provides nearly flawless defense at shortstop. UMass Boston’s David Murphy had a big season two years ago, but had to miss last season due to injury. He has rebounded admirably, batting .341 with 10 home runs (which is more than Beacon’s opposition this season). He’s also been an invaluable asset in the infield as he has a .981 fielding percentage as the team’s second baseman.

Pitcher of the Year
Danny Serreino, Rowan Profs
Serreino has been astonishing this season, only allowing 17 hits in 48 1/3 innings as he is holding opposition to a .109  batting average. He has also fanned 56 batters, has thrown a pair of shutouts and only allowed a single extra-base hit so far this season. What puts him over the top is the level of competition he has competed against as he’s helped the upstart Profs to wins over UMass Boston, Randolph-Macon and TCNJ. He and teammate Andrew DiPiazza may be the best 1-2 combination in D-III.

Also considered: Tre Thomas of La Roche is just one of many other D-III pitchers currently worthy of being honored as the division’s top hurler. He had a 0.69 ERA and is holding opposition to a .188 batting average. Other worthy candidates include Brian Owens whose presence in the Christopher Newport bullpen has made the Captains a legitimate national title contender. He has made appearances in 24 of the 36 games, compiling 38 1/3 innings in a relief role. While on the mound he has struck out 61 batters while only allowing 21 hits. Spaudling’s Jimi Keating will finish his college career as one of D-III baseball’s top statistical performers. After finishing last season with a 1.62 ERA and 124 K’s, Keating has continued to dominate, going 7-0 with three complete games and 82 K’s in 59 2/3 innings with only 46 hits and 12 walks allowed. A number of other pitchers deserve mad love for their performances so far as well. Just a few include Oswego State’s Robert Donnelly, Greg Schneider of Frostburg State, Mason McMahon from UW La Crosse and Nathan Malinovsky of Texas Lutheran. Apologies to about a dozen other pitchers who were left off this list.

Most Valuable Player
Rocco Maue, Case Western Reserve Spartans
The Spartans have been a surprise success this season after receiving little national attention in the preseason. CWRU has climbed into the Top 25 with wins over last season’s runner-up, Washington and Jefferson, Cortland and perennial power Emory on their way to a 25-6 record. Those winning boxscores are largely thanks to a breakout performance by second baseman Rocco Maue who is putting up prolific numbers for his position.  He is currently batting .393 while establishing a new school record of 11 home runs while also stealing 19 bases and compiling a soft-handed .975 fielding percentage. Maue only batted .197 while starting 39 of the team’s 40 games last year, which makes his numbers even more impressive as well as a major reason the team has clinched a share of the University Athletic Association Championship.

Also considered: Christopher Newport’s Brian Owens was mentioned as a possible pitcher of the year candidate as he’s thrown mightily in the majority of the Captains’ games. Rafe Chaumette is an offensive powder keg for Trinity with his .393 average, five triples and 12 stolen bases. Ryan Arena is a behemoth once again in the middle of the Babson batting order and Sean Guidahas kept Roankoe in the top 10 as he leads the Maroons with a .429 batting average, 14 doubles, five triples and seven home runs.

This article originally appeared on the Perfect Game website at: https://www.perfectgame.org/Articles/View.aspx?article=15123