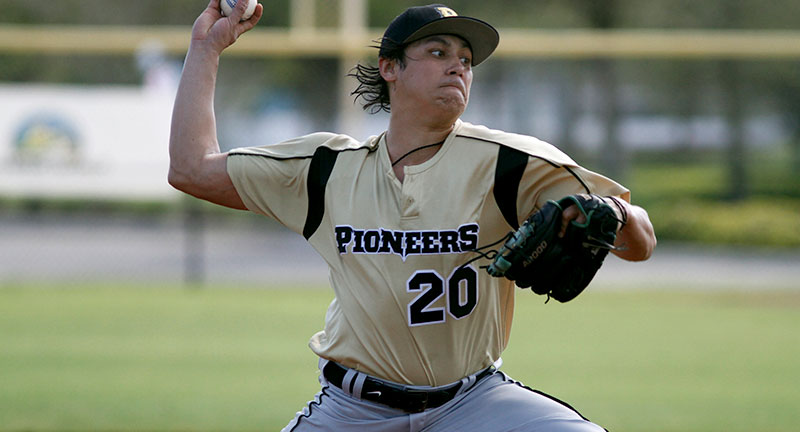 This week’s rankings have a special emphasis on strength of schedule. Earlier in the season it was necessary and understandable to weigh the rankings with an emphasis on potential rather than performance, Now that results are continuing to compile it’s becoming increasingly easily to attribute quality to wins and losses. There are tangible numbers that can help differentiate Team A vs. Team B.

Personally, strength of schedule plays a huge factor in determining where a team is positioned in the rankings. If a club earns their stripes by earning a 2-1 series win over a ranked team, it is unequivocally more impressive than a club who thrashes a fledgling team who struggles to win. That is why Nova Southeastern has been in the rankings all season. At one point the Sharks were 6-6, but there never was a thought of leaving them out of the Top 25. They had played two teams ranked in the top five as well as quality Catawba and North Alabama teams to start the season. Finishing that stretch with a .500 record was much more impactful than a team who waltzed over a group of also-rans.

SOS is important to coaches too for a number of reasons. One coach recently mentioned that although they can cash in on some easy wins by scheduling regional bottom feeders, he doesn’t want his players to develop artificial confidence. Instead he’d rather develop his players by challenging and testing them so they’re ready for conference play.

Another coach pointed out that scheduling teams is a delicate dance. Their annual goal is to compete in the conference and regional tournaments. To ensure they are not overlooked they play a tough schedule. If they put softies on the calendar it leaves little room for error as they need to have a ginormous winning percentage if they are going to get postseason invites. Additionally coaches need to watch what their opposition is doing.

“I can go 3-0 vs. regional ranked teams and another team goes 8-4,” a coach of a prominent program stated. “They played more but it goes by percentage. It’s confusing and that’s why the regional rankings are way different from human polls have.”

With each rankings update there is a team highlighted who has a high winning percentage without a strong strength of schedule, but regardless has been judged differently based on their circumstances. The rest of the season will tell if their results to date are the benefit of simple scheduling or just old fashioned quality baseball.

Rankings are based on games through Sunday, April 1.

Disappointing results by a pair of California clubs expunged them from the Top 25 and created openings for two teams to take their place. Angelo State, who’s have continued their love-hate relationship with the rankings, were reintroduced back into the Top 25 for the second time after a two week absence. The other position went to Augustana, a club that has been on the season long backburner for recognition.

The Vikings’ 24-1 record has made their exclusion increasingly difficult to justify. While the Vikings have D-II’s best overall record, they’ve earned their W’s against one of the lightest schedules in D-II. According to the numbers Augie’s wins have come against the second easiest strength of schedule in the division so it’s hard to ballyhoo their on-field results.There’s nary a victory so far this season in which they use to pump up their résumé. Of their wins only four were of the double-digit variety so they’re not exactly slaying competition either. The Vikings have a .333 team batting average, which is nice, but there are two dozen teams batting at least .320 so those numbers really aren’t crazy sexy cool either. Yet despite this, Augustana keeps on winning which in the end is what matters.

The Vikings first major competition will come this week (weather permitting) when they play a pair of games against St. Cloud State. The Huskies started the season in the Top 25 but fell out a few weeks in after a lackluster start. Nevertheless, SCSU should be a more formidable opponent than Upper Iowa or NAIA teams Morningside and Briar Cliff who’ve faced Augustana so far. With their soft schedule the Vikings have little room for error and need to impress in those contests if they are to continue to have a seat at the Top 25 table.

A team with a similar record and situation to Augustana in the NAIA is Point Park. The Pioneers are currently ranked 16th in the NAIA and have a 25-2 record. Unlike the Vikings however PPU has been in the Top 25 for the totality of the season. It was known headed into the season that the reigning River States Conference regular season champions would have a rock solid rotation and they have been as advertised.

Staff ace Nicholas Beardsley has a 1.43 ERA and is holding opposition to a .187 batting average, but amazingly those numbers aren’t all that brilliant compared to the team as a whole. The Pioneers staff has a 1.67 ERA and has only allowed 145 hits in 205 innings – both those numbers are among the tops in the nation. The batting average isn’t too shabby either as eight position players who’ve started at least 20 games are batting over .300.

However those numbers must be taken with a grain of salt. Like Augustana, Point Park has been bullying up a bit on lesser competition. As with the Vikings, PPU only has one regular division team with a lower strength of schedule below them. Nevertheless, that absence of oppositional flair doesn’t have the Pioneers’ head coach Loren Torres losing any sleep. When queried about the caliber of opposing teams they’ve faced this season, he had this to say:

“We measure our current success based on how we are playing against the game of baseball, not the opponent.”

With that Torres also notes that despite their record, their success hasn’t come easy. Point Parks’ Pittsburgh, Pa. home hasn’t allowed them the opportunity to play at their best and they haven’t been able to practice on their own field once this spring due to weather.

“With the better opponents in April will also come better weather and chances for us to perfect our game while practicing,” Torres attested.

In regards to strength of schedule there were some major happenings which disrupted the NAIA SOS rankings last week. First of all, and with far more reaching repercussions, was the reversal of several boxscores of Mid-America Christian. The Evangels, whom I had recently touted as a dark horse contender to reach the NAIA World Series, were stripped of 12 wins for having an inelligible player. The forfeits cost the team victories over strong clubs such as William Woods, Oklahoma City and Oklahoma Baptist. OCU and OKWU had only lost a combined 10 games all season and MACU was responsible for one-fifth of them. While albeit a long shot, the Evangels were transformed instantly from a title contender to spoiler role.

There were also some wins unceremoniously removed from upstart William Jessup’s record-breaking-in-the-making schedule. A compliance officer prematurely certified a player to take to the diamond. The error was caught and self reported by WJU, but the NAIA admin was not benevolent and docked the club three wins.

Although disappointed head coach Jake McKinley hopes the mistake can help the team in the long run.

“This was an internal human administrative error,” McKinley lamented. “Mistakes happen and we are fortunate to still be in a very good position as a team. I have the utmost confidence in our players, coaches and administrators and this bump in the road will only make us stronger as a collective unit. We can’t dwell on it and the group is committed to continually moving forward in a positive direction.”

The Spartans did move down a notch in the rankings, but not due to the record change. Instead WJU slipped a spot after losing a series to Hope International, a team that was in the preseason Top 25 but has been doddering on the diamond.

A team in D-III that has a lopsided win-loss total but suffers from a dismal strength of schedule is Franklin. Currently the Grizzlies are 17-1. Despite their .944 winning percentage, FC hasn’t received much consideration for the D-III Top 25. Out of nearly 400 teams their SOS currently places them around the 350 mark. Franklin’s wins have come against the ilk of Transylvania, Albion and Calvin, hardly a murderers row of opposition. Nevertheless, if the Grizzlies continue to pile out victories it will be hard to not give them the benefit of the doubt and include them in the rankings discussion.

A soft SOS has not been a problem for Rowan who continues to impress. They added another quartet of wins last week to up their record to 15-2. More impressively the Profs can tout victories over ranked teams such as Randolph-Macon and UMass Boston as well as formerly ranked Salve Regina and Southern Maine. It seems that even if Rowan had the toughest schedule in D-III they’d still be posting wins. Anthony Harrold is topping the team with an astonishing .517 batting average in his 15 games and also has double-digit extra-base hits. On the mound Andrew DiPiazza has only allowed 12 hits in 23 innings with 33 strikeouts. All of this is extremely impressive for a club that failed to get much preseason rankings consideration but are firmly entrenched in the top 10 as of now.

A team with a modestly impressive winning percentage by impressive SOS made the biggest move in the D-III rankings last week. Salisbury jumped nine spots after winning two over Frostburg State. With the wins the Seagulls now have played FSU as well as Cortland State, Keystone, Catholic and Christopher Newport. There are many teams with higher win totals but few teams who can claim such an elite list of opposition this far into the D-III season.