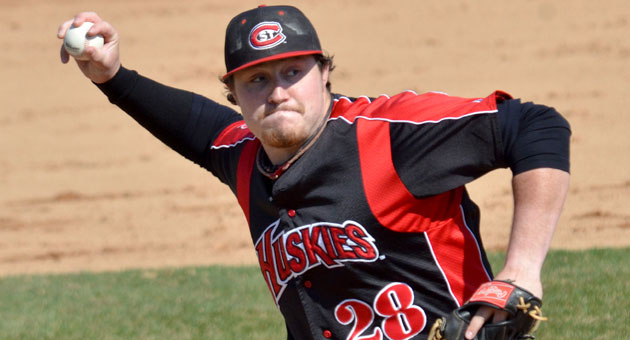 With this being the first rankings update of the season there wasn’t much marked movement in the Perfect Game small school Top 25. It’s simply still a bit too early to tell if the tea leaves and Magic Eight Ball enabled projections were up to snuff or way off target.

In D-II almost a third of the teams have yet to step between the chalked lines and in D-III barely a handful of schools have played scheduled contests. To make significant changes at this point would be like judging a show’s television legacy after only watching the pilot (to think the first episode of Seinfeld was met with poor reviews and the series was almost never developed).

Nevertheless, some minor but notable shuffling of positions has taken place. The top team remains the same in two of the three divisions, but a new school has already emerged as the team to beat in another.

Rankings are based on games through Sunday, February 14.

For the most part the launch of the NCAA D-II season went as anticipated. Top ranked St. Cloud State completed their Texas trip at the Houston Winter Classic with three wins over quality opposition. The Huskies are now taking a few weeks off from competitive ball before another trip south to Tucson next month where they’ll play a host of northern based teams that should safely push their win total to double digits.

In a season already filled with lofty expectations and preseason accolades, another honor was bestowed on Huskies senior star Reese Gregory. On Tuesday he was named to the Golden Spikes Award watch list, just one of just five non-NCAA Division I players to be mentioned. After winning 13 games with six saves with a 1.49 ERA last season, Gregory will be aiming to be just the third non-NCAA Division I athlete to win the award.

Despite his growing list of statistical success, SCSU Head Coach Pat Dolan had this to say about Gregory, “Probably the greatest thing about him, to go along with his competitiveness, is he’s really not a stat or award type of guy. He’s just a gamer!”

Despite starting the season with a pair of series losses the West Florida Argos remain in the top 10. UWF lost two leads late against Florida Southern (one of which was shortened due to rain) and went mano y mano with highly touted Tampa in three closely contested contests. Look for the Argos to get on the sunny side of .500 this week with a trio games against Mississippi College to justify their ranking.

Another Gulf South conference team deserving mention are the Lee Flames. Their tandem of Trenton Hill and Justin Alleman have been absolutely dominating as they’ve only allowed a combined 10 hits in 20 innings along with 30 strikeouts. The pair of pro prospects look like they’ll be ready to lead Lee as they challenge to go deep into the D-II postseason in their first year of NCAA eligibility.

The two teams that dropped out of the rankings were both from the Sunshine State Conference. The early season slip by Nova Southeastern wasn’t a total surprise as much of last year’s roster graduated after the season. The Sharks brought in a slew of talent to replace the departed but the team seemingly hasn’t quite congealed as of yet. St. Leo had an exciting sweep of Montevallo to start the season with the kind of wins that can propel a team to bigger and better victories, but someone on the team must have found a bad luck tiki idol while in Hawai’i as SLU returned home with a handful of disappointing losses.

Top ranked St. Thomas started the season with a 5-4 mark, but the Bobcats’ losses were hardly anything to feel ashamed about. STU tangled with three ranked opponents, splitting series with Lindsey Wilson, Bryan and Auburn Montgomery. With the losses the ‘Cats still stayed in the top three and will cut some slack in the upcoming weeks as well with an upcoming series against a quality D-II team in Palm Beach Atlantic and a pair of road games against D-I clubs, Florida International and the University of Miami.

With St. Thomas’ slight tumble it opened the way for a new team to take the top spot. After a 7-0 start Tabor was initially penciled into the No. 1 position but was bumped for Faulkner who started the season in formidable fashion with wins over Missouri Baptist, Keiser and Davenport. Keeping their talons entrenched into the top spot will be a challenge as they have games with Auburn Montgomery and Linsey Wilson this weekend. Once the dust clears from that series it will be a good barometer of who the top teams in the land are with so many preseason favorites meeting on the diamond.

The only team that had substantial movement in the rankings was The Master’s College. Unfortunately for the Mustangs, it was a rather steep slide down in position. The Mustangs’ narrow losses to UC San Diego, a perennial D-II power, were excusable, but the reigning Golden State Athletic Conference champs shouldn’t have been on the losing end of two out of three home games against Hope International, a team recently started from scratch playing their inaugural NAIA schedule. The Mustangs will be looking to restore their winning ways this week in what should be a barn-burner of a series with conference rival Vanguard.

With only eight of the 25 teams in the D-III having had games to date, the rankings remain unchanged until some more clubs get some competitive games under their belt.

Next week nonetheless look for a substantial leap into the rankings by the Whitworth Pirates. The Pirates have had a red-hot start with wins over three ranked opponents in Cal Lutheran, Emory and Concordia (Texas). The Pirates had a respectable 28-15 record last season and won the Northwest Conference postseason tournament, but had only managed a combined 27 wins the previous two years.