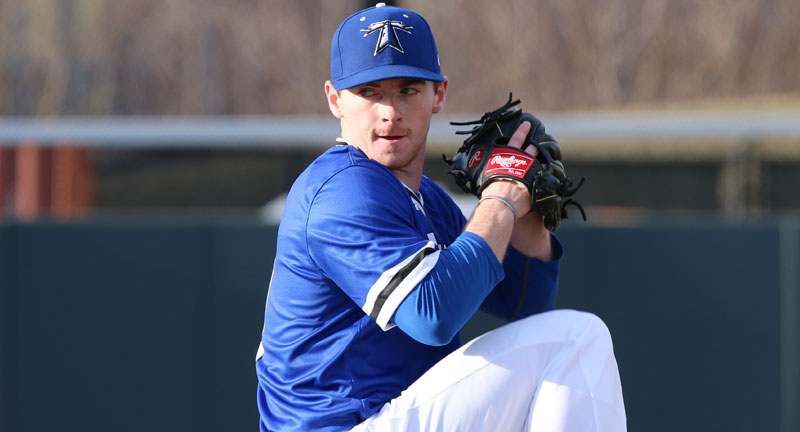 If you’re a big fan of chaos and upheaval this week’s small school rankings won’t be for you.

In D-II, nine of the teams from last week’s top 10 are still in the same group, just with a slight jostling of positions. For the most part each team held relatively close to their previous position. The only substantial move was by Mercyhurst, which, unfortunately for them, was a slide downwards from three to 11 after being edged in three straight games. There are some new teams at the tail end of the rankings which are interesting stories, (especially at St. Leo, who is playing admirably), but again, nothing earth-shaking.

In the NAIA things were even more dreadfully predictable. Top-ranked Faulkner lost a pair but no one should’ve thought the Eagles were going to go undefeated. With that the battle to be labeled No. 1 tightened, but there wasn’t much movement in the rankings, just solidifying of positions. Going through the teams starting at No. 1, it seemed possible that the entire Top 25 could stay the same, until a couple goofed it up at the end.

Now the D-III realm, that’s a whole different ballgame. Ranked teams are losing games in bunches. However, when everybody is losing it’s hard to reasonably move one team over another when they were just as unimpressive on the diamond. Furthermore, the preseason top team still has to play a single contest. It’s a total maelstrom, but its so tumultuous that pandemonium has become this year’s norm.

If you like seeing teams moving up and down the rankings, check back next week. It’s looking like it could be a real doozy. These rankings only account for games up to last Sunday and there have already been some midweek games that are raising eyebrows (Oklahoma City!?! What happened?). Nevertheless, here are this week’s Perfect Game small school rankings.

Rankings are based on games through Sunday, March 11.

Delta State opened the season as Perfect Game’s No. 2 team, but the perceived difference between them and top-ranked defending national champion West Chester was razor thin. The decision to have the Statesmen or the Golden Rams be the inaugural No. 1 could be considered a coin flip decision as both teams retained many of the athletes that propelled them deep into the postseason last spring.

When WCU lost two of their first four it allowed DSU to stake their claim to the pole position, and with the Statemen’s lopsided win results from the first one-third of the season, they don’t appear to be relinquishing the spot anytime soon. DSU has won 16 of 18, thanks largely to D-II’s biggest bat in the middle of their already well-stocked lineup.

Zack Shannon won about every award imaginable last season and is continuing his torrid pace from last season. The hulking first baseman was a Perfect Game All-American and the 34th-rated high school recruit overall and was verbally committed to Ohio State, but ended up playing JUCO ball his first two years at Wabash Valley Community College which had very good, but not interstellar success like he’s had in the delta.

Last season he made his way south to lead the Statemen into the NCAA postseason and to the national championships. The one-man-gang is well on his way of taking the Statesmen there once again. In 18 games he’s already launched 18 home runs and six doubles to amass a ludicrous 1.096 slugging percentage while tallying 37 RBI. The icing to the cake of his brilliant performance is that despite being a deadly power hitter, he’s only struck out eight times.

While Shannon is the team MVP, the team’s success is far from his alone. DSU has three other returning All-Gulf South players on the roster with tow of them, Brain Lane and Emil Ellis, currently batting a combined .395 to help buoy the team’s .328 batting average.

Statistically, the pitching staff is holding their own, but still have room to improve as their overall numbers are now from last season. That’s even more reason to worry for DSU opposition. For example Seth Birdsong, who threw 101 2/3 innings and held opposition to a 3.01 ERA last season, currently has a robust 5.70 ERA. As a matter of fact, no staff starter has a sub 5.00 ERA and the team still is running away with ballgames. Nevertheless, the team’s pitcher need to get in form sooner than later as West Chester isn’t the only team who’s ready to usurp the spot if top spot if the opportunity arises.

The big move up in the rankings was by Columbus State. The Cougars have been on the short-short list all season to be included but hadn’t made the cut. After they took two from UNC Pembroke their omission couldn’t reasonably be made again. CSU, Georgia College and Flagler are playing brilliantly in the Peach Belt. The trio is a combined 28-1. That lopsided record could continue to escalate as none of the three play against each other for the next couple of weeks.

Those teams and UNCP make the PBC an exciting conference to watch this season. In fact, with that lot and some super quality teams out of Conference Carolinas and the SAC, its a gosh darn shame that only one of those teams is going to be able to advance to the national championships at the end of the season.

In addition to Columbus State, new teams in the D-II rankings this week are Central Missouri, St. Leo and Texas A&M Kingsville.

The big news in the NAIA was that top-ranked Faulkner finally lost a game; not only that, they dropped a series to Mobile 2-1. Despite the losses for the Eagles and the quality wins by the Rams, neither team moved in the rankings.

The Eagles’ setbacks do open the door for St. Thomas, Georgia Gwinnett or William Carey to claim the top spot should FU stumble again (second-ranked Oklahoma City has lost two games, one inexplicably to a really bad Central Christian team after this weeks rankings were finalized and will certainly drop next week). Gwinnett and Carey clash this weekend. A sweep by either could them the boost to take the No. 1 distinction regardless of what Faulkner accomplishes. Oklahoma Wesleyan and USAO are also closing the gap but have an absence of quality wins which hurts their résumé.

The Rams’ not getting a rankings boost doesn’t undermine the quality of their last two weekends (before the wins over Faulkner, Mobile bested Middle Georgia State in two of three). It certainly solidifies their standing as a legit club. Prior to those series their wins came against the ilk of Concordia College Selma, Midway, Selma and Central Baptist, so their winning record was a little suspect. However, now it’s clear that they are legit. With a deservedly soft schedule the rest of the month the Rams should continue to stick in the middle of the NAIA table.

Just as neither Faulkner nor Mobile moved in the rankings, and neither did any school in the top 17 positions. As a result there wasn’t much movement anywhere in the NAIA rankings as teams pretty much played as anticipated. The last position in the rankings was taken by Lyon who is leading the American Midwest Conference. They edged Indiana Southeast, Northwestern Ohio, Jamestown and their resurgent conference rival Missouri Baptist for the spot vacated by LSU Shreveport.

The NCAA D-III results continue to be an uncanny unpredictable record of outcomes with few top-ranked teams dominating their opposition. At this early part of the schedule there are typically a handful of teams which can tout unblemished records, but there’s nary a team with a perfect record. The top two teams, UW-Whitewater and Wooster, as well as North Central, who comes in at No. 12, are the only ones to make that claim, but it’s not too much to brag about as they’re only played a total of three games between them.

One team has has been looking good in their limited success so far as the UMass-Boston Beacons enter the top five after winning five of six. Albeit early, the Beacon are looking solid on both sides of the ball.

After missing last season due to injury, second baseman David Murphy hasn’t missed a beat since returning to the starting nine. In his nine games back he’s already hit four home runs. While that total doesn’t seem substantial on its face, note that number is only one less than the rest of his team combined with the count of homers hit against the Beacons in 2018. Kyle Boudrais and Chris Fowler, who batted .368 between them and combined for 198 total bases last year, are also off to solid starts.

Sophomore Joey Rogers has looked like a seasoned upperclassman in his first two starts on the mound. He earned the win in the season opener against Lasell and earned another W against a ranked St. John Fisher club. In those contests he only allowed a single earned run in 11 innings (0.82 ERA). Again, it’s super early, but it’s not too premature to think he could be a breakout performer for UM-B based on those early results combined with the 4-0 record, 3.12 ERA and .227 opposing batting average he earned last year.

Another player back after missing last season is J.T. Morin. In 2016 he led the team in strikeouts. While he’s only made one appearance this season it was a successful one as he K’d six in four innings without allowing a hit.

Keep watching the Christopher Newport Captains as they quietly compile wins and climb in the rankings. CNU had a tremendous season last year but fizzled at the end, losing six of their final nine games. That crashing close likely cost them an invite to the NCAA postseason.

The Captains’ Logan Harrelson has been absolutely incredible on the mound this year. In his five appearances he has thrown 24 innings and only allowed 10 hits and a pair of runs. He’s only walked four batters while striking out 32. He and freshman Josh Husby, who has earned the win in both of his starts while only allowing a single earned run, are a big reason CNU is batting nearly 100 points higher than their opposition and have generated a team ERA well under half their competitors in 16 games played.