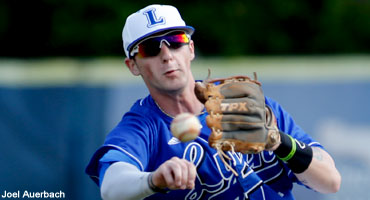 Each week this section of the rankings is typically used to highlight the on-the-field action of some of the top teams in the respective divisions. This week however we’re going to take some time to give ink to a few clubs which just missed making the Top 25 cut. These aren’t necessarily the next teams that were next in line, but rather some noteworthy teams that deserve a little extra kudos for their on-the-field performance so far this season.

Many, if not all, of these teams deserve to be in the Top 25, but there simply wasn’t enough room to squeeze them in. I reckon we could have a big tie at the end to cram some more clubs in, but that would be cheating.

Their exclusion isn’t a product of subpar performance but rather a testament to the teams above them that are narrowly holding them off. In order for a new team to enter the rankings it means that another must be removed to make room. However the schools in the Top 25, especially in the 15 to 25 range, continue to win series and perform well to keep them listed in the midst of the nation’s elite. As such, the following schools are among the cream of the crop ready to rise to the top once another team falters.

Rankings are based on games through Sunday, March 15.

Lynn Fighting Knights
In 2009 Lynn won the D-II national championship, but the title didn’t parlay into continued success. While the Knights haven’t fallen off the radar, they haven’t established a dynasty either. This season has been hard to gauge as sometimes the Knights look like the club that celebrated in Cary six years ago, while other times they look like the bubble team that they are. LU has wins over Columbus State, Florida Tech and NAIA stalwart St. Thomas. The problem is the wins were all a part of series losses or were canceled out by rematches. With that being said, Lynn hasn’t quite broke the rankings threshold yet this season, but they’re unquestionably in line for consideration when another team falters.

Armstrong Atlantic Pirates
After sweeping conference-mate USC Aiken the Pirates made a brief appearance in the rankings, but have sat on the cusp of the Top 25 ever since. I thought Armstrong was going to crack the list once again after besting Mount Olive in a mid-week matchup last week, but they promptly lost a series to a good, but not great, Tusculum team over the weekend, which put their return on ice. Armstrong has the blessing and curse of being in one of the most competitive and highly regarded conferences where every win is a battle and they’ll have plenty of chances to show they are deserving of a rankings return as the season continues.

Washburn Ichabods
Last week, when considering which teams could possibly be included on this list I fully expected Washburn to be a non-issue. The Ichabods were ranked as high as sixth in other rankings, but their 14-0 record headed into the weekend was fattened by feasting on a series of unranked opposition which featured some traditional second-division schools. Prior to the season Washburn was projected to finish ninth in their conference while Emporia State was well established to be the top MIAA team and was also looked at as a strong national title contender. As such, when WU played a four-game series with Emporia State I fully expected the Hornets to dismantle the upstart Ichabods and send them back down to the land of “receiving votes.” Nonetheless, the two teams split the series and were fairly evenly matched all weekend. However, that now raises the question if the Ichabods the real deal or has Emporia State been overranked? I’m waiting one more week before inserting WU into the Top 25. If they win their series with MWSU this week I’ll have no choice to wedge them in somewhere.

Truman Bulldogs
I never thought I’d see the day my alma mater was considered for the D-II baseball rankings. When the school changed its name from Northeast Missouri State to Truman State it also ushered in a new era of greater emphasis of education and athletics seemed to take a dip. However, after sweeping the defending champion Southern Indiana Screaming Eagles that day has come. The Bulldog baseball team has only have a single D-II loss this season and appear to be just as formidable as fellow alum and WWE Superstar Kane. If TSU keeps chokeslamming opposition they could find their way into the Top 25 sooner than later.

Tennessee Wesleyan Bulldogs
Tennessee Wesleyan is a team that has been in rankings limbo all season. On paper they look like a team that should be in the Top 25, but they haven’t sealed the deal with a big win to propel them into the list of the elite. They had a win over Northwood last week but it was also followed by a loss to Embry-Riddle which the Eagles used to get into the rankings rather than TWC. The Bulldogs have upcoming games against Lindsey Wilson (who could also be on this list) and Bryan which could earn them some rankings cred. Otherwise it’s going to take stockpiling a bunch of victories along with winning at least two of three future games with Faulkner to break into the list.

Northwestern Ohio Racers
The Racers started the season in the Top 25, but were quickly escorted out after going 2-5 to start the season. Since then UNOH has gotten its groove back and has won 12 of their last 13 matchups. With no games against ranked opposition in the near future the Racers are going to have to win often and impressively if they are going to rejoin the rankings. Otherwise they’re going to need to sweep highly ranked Davenport in mid-April to get enough attention to reclaim their spot among the top teams in the nation.

British Columbia Thunderbirds
Like Northwestern Ohio, British Columbia had a position in the preseason rankings but fell out at the first rankings update. The Thunderbirds did start the year with eight straight wins, but all were against Canadian school Thompson Rivers University who doesn’t quite play at the NAIA level. UBC claimed a win over No. 14 ranked The Master’s, but in their only other game against a ranked team the ‘Birds suffered an lopsided 2-21 loss to Lewis-Clark State. In 15 of their their 27 games this season UBC pitching has only given up a single run or shutout their opposition. However, how much of that is a testament to quality pitching or a light-hitting schedule remains to be seen. The biggest measure of the Thunderbirds ability won’t be until the end of the season when they travel back to Idaho for four more games with the perennial NAIA power LCSC Warriors.

Tufts Jumbos
Tufts went 34-9 last season, but many of those victories were earned on the backs of a senior-laden team. Their graduation left Head Coach John Casey with a number of holes to fill if the Jumbos were to have similar success this season. So far it’s too early to tell if Tufts will be a contender once again, however the prognosis is good. Jumbo hurlers have tossed shutouts in three of the team’s first six games and four times the offense has erupted for double-digit runs. Furthermore, Tuft’s only losses came by the slimmest of margins – one was in extra innings and the other was by a single run.

Heidelberg Princes
The Princes have jumped to a 10-1 start and were already on the short, short list of teams to watch headed into the season. Nonetheless, the Princes haven’t exactly been kings of the diamond. Despite their record, their opposition has a higher batting average and have been keeping games close. Whether or not they are a legit rankings contender will be demonstrated this week with games against Baldwin Wallace and La Roche. If the Princes can capture the crown in two of the three games against their ranked opponents they should make the list next week.