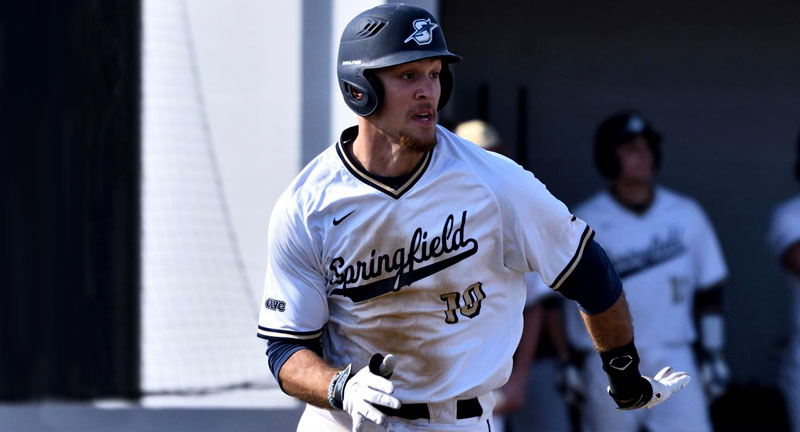 With this being the fifth in-season ranking, it’s unofficially the halfway point of the college baseball regular season. The pendulum officially swings from teams being rated less on potential and more on performance. Before the season started that were a number of teams like looked like legitimate title contenders, however, for one reason or another their postseason expectations are diminishing.

In D-II Emporia State looked legit as they returned five position players, added a solid D-I transfer bat and had both their top two starters back on the mound. Nevertheless, the Hornets have looked not much more than meh so far, accumulating a 13-10 record. It wasn’t until the MIAA conference tournament that ESU reached double-digits in wins last season.

As far as NAIA teams go, this spring has been a bust for Bellevue and Clarke. Both teams were in the preseason top 10, but both are well under .500 and the Pride was no-hit last weekend.

D-III teams aren’t immune from disappointment either. Last year’s UT Dallas club compiled a 33-11 record despite having only three seniors on the roster. Consequently, many of the players from that winning club took to the diamond again this spring. Nevertheless, the Comets have an 11-11 mark and allowed 20 runs to score in their last game.

For these teams the window of opportunity is rapidly closing. There is still time to make amends on the diamond – as long as you can make your conference tournament there’s a chance to earn an extended postseason invite – but playing your last two months under the gun is exhaustive.

I’m not ready to close the book on ESU, Clarke or UT Dallas, but those teams and other underachievers need to start winning games and start winning them quick. The teams on the lists below have the upper hand headed in to the second half of season, because now they’ve shown that they don’t just have tools and the talent to get things done, but they’re getting the results as well.

Rankings are based on games through Sunday, March 18.

A new team was added to the D-II rankings mix as the University of Illinois Springfield Prairie Stars made their Perfect Game Top 25 debut. Their inclusion comes on the heels of UIS’ nine-game winning streak, which has been punctuated with a pair of shutout wins. Had it not been for an unfortunate ninth-inning error, the Prairie Stars may be riding an amazing 17-game winning streak as they’ve only lost one contest since dropping their first three.

The pitching for USI has been flat-out phenomenal. Last season the staff finished the year with a stout 4.85 team ERA. This year the total has been half that with opposition only averaging 2.33 earned runs per nine innings. It’s no wonder that teams are having a hard time scoring against them, they’re hardly getting on base. The staff is holding batters to a dainty .190 batting average and has fanned far more batters (188) than hits allowed 119.

While several players have been upping their game, a big reason for UIS’ dramatic pitching improvement has been the addition of Justin Revels and Andrew Dean to the rotation. Revels, who began his career at Grand Canyon, has only allowed three earned runs in his five starts and has a sub 1.00 WHIP with his 0.93 ERA. Dean, who also formerly played D-I ball at Texas Southern, is putting up similar numbers. In his last outing, a complete game road shutout against Rockhurst, he was still reaching the 90s with his fastball.

The team is batting .318 with Nick Stokowski and Michael Rothmund looking like All Americans in the making. Stokowski is topping the team with a .419 batting average, and the 6-foot-6, 250-pound behemoth Rothmund – who was named one of D-II’s top professional prospects prior to the start of the season – is nearly hitting .400 himself, batting .392 and leading the team in slugging (.797) and on-base percentage (.495).

Illinois Springfield travels to Southern Indiana this week and will try to keep the slumping perennial power under .500. In two weeks will be UIS’ biggest test of the season when they welcome Indianapolis and battle to control the GLVC East standings.

The big series this past week was when Tampa was tested by rankings newcomers St. Leo. The Spartans’ hurlers dominated the series, pitching a pair of shutouts in the sweep. UT closer Mark Moclair has been dominating all season, earning three wins and four saves in his eight appearances. In 25 innings on the mound he has only allowed seven hits (.092 opposing batting average) and has struck out 43 batters.

They’ve been out of the rankings the last two weeks since starting the season at No. 13, but continue to keep an eye on Northwood. The Timberwolves have won their last seven in a row including a neutral site win over defending national champ and currently fourth-ranked West Chester. If any team currently not ranked is going to make a deep run into the postseason, it’s going to be them.

It was another big week for Georgia Gwinnett who notched another four wins, three of which were over ranked competition, as they out-scored Bryan once and William Carey twice. That raised GGC overall record to a handsome 23-4 mark. Other teams that have been ranked at some point this season and who have been bested by GGC include Missouri Baptist, Webber International, Indiana Tech, Tennessee Wesleyan, Clarke, Madonna and Lewis-Clark State. You could argue for another team having a more daunting schedule this season, but you’d be unequivocally incorrect.

As formidable as their fixtures have been, there isn’t any relief in sight. The Grizzlies play Middle Georgia State this week, followed with a clash against top-ranked Faulkner the following weekend. That matchup is certainly the series of the season and whoever claims the best of three will certainly be the top-ranked team once the dust settles.

One of the perplexing results of the season occurred when previously second-ranked Oklahoma City lost a game to Central Christian. The CCC Tigers are currently 4-27 and have no business taking down a Stars club of that caliber. It was a weird, weird result, which goes to show that anything can happen in NAIA baseball. If those clubs were to play a 100-game series it wouldn’t be shocking to see OCU sweep the century series.

The Master’s Mustangs, who played in the NAIA World Series last season, and Tennessee Wesleyan, who started the season in the top five and were given a long leash to stay in the standings after an abysmal start, bowed out of the rankings this week. Taking their place were a resurrected Indiana Southeast Grenadiers club and Campbellsville Tigers team. The two teams have been campfire hot as of late and been making s’mores of opposition.  IU Southeast has won their last 13 and Campbellsville can claim wins over five teams, which have been ranked at some point this season. The two were supposed to meet up this week, but the sadly weather conditions are making it unlikely to be played.

UW-Whitewater continues to be the top-ranked team in D-III and it’s not hard to see why. They haven’t lost a game all season and their pitching staff has yet to allow a hit this spring. Albeit that is due to them not having to play a game this season, but that will finally change this week as they’ll play eight games in eight days in Florida. They’ll start their season with 19th-ranked Babson and also have contests scheduled with formerly ranked St. Thomas and last year’s national runner-up, Washington & Jefferson. Within the next week we should finally have a bead on if the Warhawks’ top preseason ranking was warranted.

One of the best on-the-field performances to date as been by the Rowan Profs. Not only are they compiling wins with authority, they’re toppling impressive competition in doing it. The Profs are one of the few D-III clubs that can claim wins over three teams that have been ranked, with wins over Randolph-Macon, Salve Regina and Southern Maine. After making their 2018 rankings debut last week, the Profs made a move into the top 10 following their perfect spring break trip that added eight wins to their total. In six of their eight games at the RussMatt Invitational they scored double-digits, and scored no less than eight in any of the contests.

Frostburg State’s Greg Schneider is continuing to make opposition look foolish this spring. He has earned the win in each of his four starts, throwing 27 innings while only allowing nine hits and six walks with an astonishing 54 strikeouts – that computes to an even 18 strikeouts per nine innings. He’s not earning those numbers against a bunch of daisies either. His last outing was against top five-ranked Shenandoah. The Hornets did manage to score twice against him (doubling his ERA to a still minuscule 1.00), but Schneider still fanned nine in five innings.

New to the rankings this week is Case Western. CWRU completed their spring tournament run with a 7-0 record to improve to 10-1 on the year. Closer Liam Killingstad has two wins and three saves in his five appearances on the season. In his eight innings in relief he has only allowed a pair of hits to help the Spartans move into the rankings at No. 18.

This article originally appeared on the Perfect Game here: https://www.perfectgame.org/Articles/View.aspx?article=15024