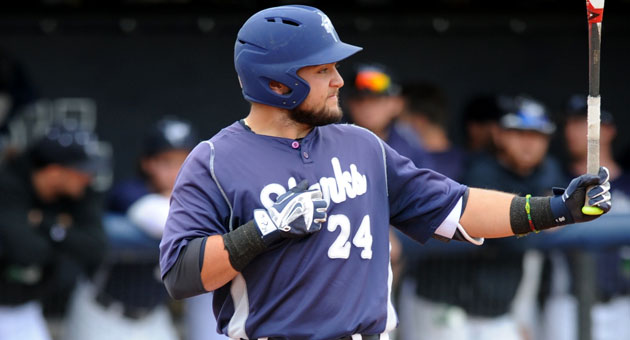 As the season reaches the unofficial halfway point, a generally clear consensus can be made as to who the top teams in the land are. While there may be some argument who the No. 1 team is, anointing a club as being worthy of being put in the top 10 or 20 shouldn’t be as debatable. For these clubs gaining a postseason berth shouldn’t be too problematic. As long as they continue to win their fair share of games they’ll get an invite to the extended postseason. If there are some unexpected auto-bids some of the teams around the 20-mark may start to sweat a little, but as for now, the postseason is theirs to lose.

It should go without saying though that there still is plenty of baseball left to play. It is not uncommon for a midseason dark horse to catch fire late and ride a winning wave to conference and regional titles. Last season in D-II, Henderson State and Truman State were penciled in as “also rans,” but a slew of April and May wins got them to the national championship series. Vanguard was an example of an NAIA school that received a late at-large berth and was able to parlay it into a World Series appearance.

This week, in addition to the updated rankings, we’ll look at a few clubs from each small school division which are narrowly outside of the Top 25. Each of these teams have their work cut out for them if they want to fulfill the preseason goal of capturing conference, regional or national titles, but don’t expect any of them to be left out of the postseason without a fight.

Rankings are based on games through Sunday, March 20.

Over the weekend Nova Southeastern took two of three from fourth-ranked Tampa. The defeats tripled the reigning national champ’s loss total on the season, and, the remarkable series win capped a terrific week which also included a win over highly touted Southern New Hampshire. For most teams which have been ranked during the season, such a terrific week would be enough to propel NSU up the rankings, but for now the Sharks remain on the outside.

As good the Sharks were last week, the season has been inconsistent at best.  They started the year with discouraging losses to Tusculum, Newberry and Catawba and also have dropped a home game to Colorado Christian who is well under .500 and has lost their last 10 games.  Leading up to last week, NSU was swept at home by Lynn and looked nothing like the team that outscored Tuskegee and American International in four games by a combined score of 54-1.

NSU is back on the radar, but they’re going to need to win series over St. Leo and Barry to regain their Top 25 ranking. With an absolute ace in Alex Mateo and proven closer Devin Raftery, the pitching corps are in good hands, but the offense needs to erupt against the arms of their top competition and not just pad their offensive stats against weaker teams. Former D-I players Danny Zardon and Brandon Gomez have been catching fire as of late and big seasons by that tandem should give NSU the boost they need to get back into the thick of regional and national rankings.

For the last several weeks West Texas A&M has been unofficially in the “receiving votes” category as one of the last teams left out of the rankings. Had the Buffs won their series against Angelo State they may have joined the rankings this week over state rival Lubbock Christian, although the Chaps 10-run win over WTAM was a heck of a tie-breaker when comparing the teams.

What hurts the Buffs is a lack of showcase games. Despite a win in their second game of the season over St. Edward’s, the Buffs can’t boast a win over a ranked opponent and likely won’t face another Top 25 team until the South Central Regional, aside from one midweek matchup with Lubbock. Until then the Buffs will have to win in bulk and style to garner attention.  Although I’m typically not an advocate of teams piling on runs unnecessarily, some double-digits wins in their upcoming series against Eastern New Mexico and their staff 9.23 ERA, could be the tinder the team needs to spark an offensive explosion.

It’s still too way too early to write-off perennial Great American Conference stalwart Southern Arkansas from being a team to be reckoned with. The Muleriders fell out of the rankings two weeks ago, but aren’t too far from resembling that standard SAU team which has advanced to the NCAA regional tournament eighth straight seasons.

With the GAC looking like a conference that will only have a single representative sent to the Central Regional, SAU won’t want to pin their postseason hopes on a conference tournament win. As such, the Muleriders need to up their win ante by filling their rankings résumé with a plethora of convincing wins to make sure they’re not overlooked later this spring. SAU really needs a reversal of fortune from 2015 All-GAC First-Teamer Landon Simpson, who’s been beaten up in a couple of appearances this year which has resulted in a much more robust ERA than anticipated.

When top pro prospect Lucas Erceg transfered to Menlo from Cal it added a big bat to an already dangerous offense. Menlo has out-homered opposition 43-7 and has a team .469 slugging percentage, largely in part to the Mantle/Maris-esque combination of Erceg and Garrett Gemgnani. The pair have each already reached the double-digit mark, and while Erceg can boast having more strikeouts than homers (11 to 8), Gemgnani has a .466 on-base and .745 slugging percentage.

Despite the big bats in the middle of the order, the Oaks have spent the season on the outskirts of the rankings. They’ve had two opportunities to usurp rankings positions from fellow Golden State Athletics Conference foes, but failed each time to make the jump. They lost a series in February to Westmont and only managed to win one of four from Vanguard this past weekend.

The Oaks do have three exceptional opportunities to show they belong in the rankings before the season is over. Along with a double-header against reigning national champion Lewis-Clark State, Menlo still has conference series with The Master’s College and Vestment to play. If the Oaks find themselves on the winning end of either of those two series they’ll finally make their move into the Top 25.

Rio Grande started the season with a 2-6 record against a pair of quality opponents in Bryan and Southeastern. Since then they’ve gone 15-5 and in 10 of the games the Red Storm reached double-digit run totals. Rio’s powder-keg offense is detonated by a solid lineup in which almost every regular starter is batting over .300 and the team has 59 stolen bases which puts them in the top 20 nationally.

If the Storm are going to have a late season run like last season, when they fell one game short of reaching the NAIA World Series, they’ll need to continue their offensive success and somehow have aces Zach Harvey and Daryin Lewis keep dominating on the mound.  The two have broken the team’s statistical bell curve and pitched 84 of the team’s 199 innings. If they can get some other arms to step up and and be successful, Rio could find themselves in the national Top 25 sooner than later.

Another team to keep an on is York. The Panthers have a 22-5 record and four of those L’s came against second ranked Bellevue and a very good D-II Oklahoma Baptist team. After sweeping Ottawa (Kan.) over the weekend, York is riding a 16-game winning streak.

The Panther’s Top 25 worthiness will be determined the next couple of weeks. Fourteenth-ranked Sterling will visit York this upcoming weekend and eighth-positioned Tabor will visit in early April. If York escapes those two series in good shape, they’ll travel to Oklahoma Wesleyan and play a series with the 10th-ranked Eagles. If York can capture at least one of those series and put up a good showing in the other two, the Panthers will be penciled into the rankings before April is over.

Baldwin Wallace was ranked in the top 10 to start the season and justifiably so. The Yellow Jackets were coming off a season in which they set a school win record for the fourth straight season and had their top four hitters and a cache of experienced arms back on campus. Nevertheless, the season hasn’t gone as anticipated. Aside from starts by ace Mark Zimmerman, the BW lineup hasn’t put up much offense, and he doesn’t need the increased run production. In four of 13 games BW batters have only managed a single score. Currently Baldwin is mired in a losing stretch where they’ve dropped five of six games and their team batting average is down to .242 from last year’s .321 clip. Those numbers aren’t likely to continue much longer, and with games against Otterbein, Marietta, Wooster and Oho Northern coming up, they better turnaround soon. Baldwin is down, but not out.

The Whitworth Pirates have perpetually been one of the last teams kept out of the rankings. After they started the season 11-0, the program’s best start in history, the team was primed to make their move into the Top 25, but soon after they lost four of five to put those plans on hold. Their winning ways have started once again, and are currently the winners of five in a row. The Pirates’ prowess should be more definitively determined early next month when they host conference win leader Pacific for a three-game series. Until then they’ll have to bully Lewis & Clark (not to be confused with Lewis and Clark State) and Linfield.

With wins over Webster and Cal Lutheran, Buena Vista has had a good start to the season, but a little bit more of a sample size is needed to determine if the Beavers will join the Top 25. If BVU can continue to take care of business on their spring trip to Arizona they’ll be a good place to make a move, especially if they can take two of three against IIAC rival Warburg early next month.