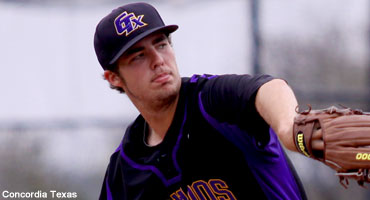 With unseasonable wintery weather and spring finally upon us the action on the diamond has a gone up with the temperature. Many teams are also in the midst of their conference schedules which ranks up the intensity on the field even further. With rivalries renewed, it’s a great time to be a fan of the game.

Big upsets in the small school standings led to some major changes in the rankings this week. Two of the three divisions have a new team atop their Top 25 and a strong case could be made for a complete changing of the guard in all three.

Rankings are based on games through Sunday, March 22.

After starting the season 14-1 with a series win over reigning national champion Southern Indiana and an exhibition win over the Philadelphia Phillies, the Tampa Spartans have been becoming increasing vulnerable. UT has gone 7-5 in their last 12 games, none of which were against ranked competition. While they still look solid overall, the door has definitely been opened for another team to usurp their No. 1 spot.

There were five teams that were seriously considered for No. 1: Tampa, Seton Hill, Colorado Mesa, Nova Southeastern and Franklin Pierce.

Franklin Pierce and their 19-1 record were worth a strong look. Their only loss this season was a single run defeat to a top 10 Mount Olive team in what was essentially a home game for the Trojans despite being played at a neutral site. The Ravens also have an unfathomable, crazy-insane 1.67 team ERA for the season. The problem is aside from UMO, Franklin Pierce hasn’t played any stiff opposition. Until the Ravens play some higher quality competition, which possibly may not come until FPU plays its way to the D-II Championships, it’ll be hard to consider them the best team in the country.

Tampa’s conference rival, Nova Southeastern, has been playing brilliant ball this season. They have a 24-4 record and unquestionably deserve consideration. NSU did move into the top five after sweeping Florida Southern, but not the No. 1 position, at least not yet. The next two weeks will show if the Sharks are a team worthy when they play series with a very good Lynn club as well as Tampa.

That leaves three clubs left for the top team this week. Defending No. 1 Tampa, Seton Hill and Colorado Mesa.

At one time each of those three teams were penciled in as top dog in D-II. There was a brief thought to keep them all there and have some sort of three-headed chimera beast ruling over the rankings. It was an easy solution to the dilemma of choosing who to keep No. 1, but a cowardly out.

Colorado Mesa is the top choice for other rankings, but not here. Somehow the Mavs are even better this season despite losing two of the best offensive players in the country from last season in which they finished as the national runner-up. CMU is riding a 19-game winning streak and can boast multiple wins over ranked UC San Diego and highly regarded Dixie State and Cal Baptist. Their next big test will be in a couple of weeks when they face a surging CSU-Pueblo club.

If Tampa’s losses were spread out over the season, they’d still probably be No. 1. However with them struggling as of late there is a new No. 1 for the Perfect Game D-II Top 25: the Seton Hill Griffins.

The Griffs lost few key players from a team that reached the D-II Championships last season. With the return of Pat McCarthy from an injury that sidelined him last season and the resurgence of player of the year candidate Nick Sell, Coach Mark Marizzaldi’s team has an explosive offense that few can match. The pitching staff’s ability has been building to a crescendo as well and few can equal the cut of their jib. The Griffs have four losses this season, each by only a single run. If they can keep their pace they’ll be a shoo-in for a return to Cary and are unquestionably a fine heir to the No. 1 throne vacated by Tampa. At least for now.

Despite a second loss of the season, Missouri Baptist keeps its spot as the top team in NAIA, however the gap between them and second-ranked Oklahoma Baptist is shrinking.

OBU earned their first true impressive win of the season as this column was being written, a midweek victory over No. 4 Tabor which didn’t factor into the rankings. If the Bison are able to parlay that effort into a series win over Oklahoma City this upcoming weekend it should give Oklahoma Baptist the edge to supplant the Spartans. Nevertheless, the choice between picking a top ranked team between MBU and OBU is a true coin-flip.

There really wasn’t much newsworthy to write about in regards to the NAIA action on the diamond this week. Over half of the of the Top 25 teams won all of their games which didn’t allow for much moving and shaking in the rankings. Some teams at the tail of the pack did falter a bit which allows some teams on the outside an opportunity to break into the list.

Tennessee Wesleyan had a win over a good Lindsey Wilson club and took two of three from Bryan to enter the rankings for the first time this season. The Bulldogs should be a fixture in the Top 25 for the next couple of weeks and will have a chance to really make some noise in early April when they play a pair with Faulkner.

After appearing in the rankings briefly early in the season, both Campbellsville and Northwestern Ohio are back in the mix. The Tigers swept a good, but underachieving Georgetown College team and the Racers won four games that included three shutouts. Despite the impressive pitching effort UNOH is getting it done with the stick as well. The Racers have a .343 average which puts them in the top 10 in the nation.

Unlike in the NAIA where teams played as anticipated, things got really messy in D-III last week. Few teams escaped a loss and many managed to drop multiple games which made positioning the clubs a daunting task.

The upsets created a new team at the top of the rankings, the third different school of the season to be at the top of the list. After Birmingham Southern went 3-3 on the week (and narrowly escaped a fourth loss due to a suspended game), Cortland State jumped into the D-III pole position. The Red Dragons have only lost one of their first 15 games this year and that loss was a one-run walk-off affair.

SUNY Cortland got the nod over reigning champ UW-Whitewater and Salisbury. Each of the pair received serious consideration for the No. 1 spot, but had to settle for remaining in the second and third positions, at least for one more week.

One team that is racing up the rankings is 10th ranked Concordia (Texas). The Tornados started the season in the Top 25, but briefly fell out after a slow start. Since then they’ve been bounding up the rankings each week. Another strong couple of weeks and they could be worthy of consideration of the No. 1 position as well.

The Tornados have a stout pitching staff that is fronted by former MLB draft pick and Texas hurler Cameron Cox. Cox got into some trouble at UT but appears to have his college career back on track and is proving to be one of the best hurlers in the division. In seven starts this season he has gone 6-0 with five complete games and has only allowed 28 hits in 46 innings with 44 strikeouts. He is far from the Tornados only capable pitcher however. As a team CTX has a 2.34 ERA and is holding opposition to a .201 batting average.