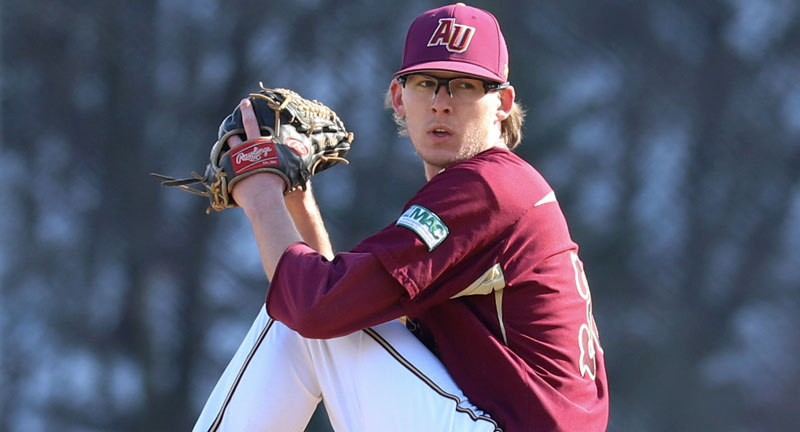 With the NAIA regular season already having come to a close, and their NCAA small school counterpart’s climaxes quickly approaching, it’s more important to see what teams aren’t in the latest rankings rather than who makes up the Top 25’s. Historically the overwhelming majority of teams currently in the top two dozen will have their postseasons extended, with only one or two ungraciously not making the cut.

Consequently, along with the latest rankings is a quick view into which teams are in the bubble zone of their respective fields. These teams have put together accomplished seasons, but they are lacking that a necessary “je ne sais quoi” which makes them a lock to keep playing once their conference tournament champions are crowned.

For many of these teams the need to finish the season with impressive wins is imperative. A poor performance the at this point could be detrimental to the opportunity to receive a postseason bid.

Rankings are based on games through Sunday, April 29.

The Central Region is the hardest region to predict with no clear-cut line for who’s in and who’s out for the extended postseason. Central Missouri, Augustana and Minnesota State all seem like certainties, but after them it gets a little tricky. St. Cloud State would be my personal fourth pick, but they’ve been undeservingly put in the lower half of the media region rankings as of late. The GAC looks to be a two-team conference, so if someone other than Arkansas-Monticello or Southern Arkansas wins the conference title, it’ll likely mean the other is staying home.

However the top of the MIAA table hasn’t exactly been looking particularly impressive. Central Oklahoma and Pittsburg Statewere the third and fourth teams in last week’s region rankings, but neither have been playing convincingly well over the past couple of weekends. This is definitely a region were ripe for an upset where an expected team like Oklahoma Baptist could win their way to an automatic berth in a conference tournament.

The biggest question in the South Region isn’t so much who’ll make it in, but who will be the host. Florida Southern and Tampa play each other the last weekend of the season. Should each of those teams will their series this weekend, it seems likely that the winner of the Mocs and Spartans matchup will be the No. 1 seed. Nova Southeastern looked like they could have snuck in the backdoor to host had they won their series over the Mocs last weekend, but now they’re playing for position.

Delta State could easily be awarded the top position in the region should somehow FSC and UT look bad to close the season, but that seems unlikely. Nevertheless, the region does have a cache of quality teams and some good schools will be left home. St. Leo, who was seventh in the previous media region rankings, could help their cause tremendously as they visit top-ranked Florida Southern this weekend.

The Southeast is the other prominent region where a good team is going to be left out. North Greenville will be the top seed and host barring a complete collapse (which could happen if Nova Southeastern hits like they did Sunday against Florida Southern in their upcoming series). Georgia College, Belmont Abbey, Columbus State and Mt. Olive seem to have all secured their postseason bids.

Personally I don’t like to root for anyone, but I’m pulling for UNC Pembroke to advance to regional play. The Braves have been in the Perfect Game Top 25 all season and are in the top 10 in RPI with their massive win total and strong SOS. Despite this they were positioned in the eight position in last week’s official regional rankings. Wingate and USC Aiken are quality clubs but UNCP is scarily underrated and needs to be in the NCAA postseason.

Arkansas-Fort Smith and Colorado School of Mines were surprisingly the top teams in last week’s official South Central Region. Personally, I don’t see either of those two clubs being able to complete with the ilk of Colorado Mesa, TAMKU, Angelo State and West Texas A&M. I’d wager Lubbock Christian and St. Edward’s would take series from them as well.

Accordingly this region is one to keep an eye on the last week and in conference tournaments. UAFS plays Lubbock on the road this week and I’ve got a feeling in my bones that the Chaps will take the series and put the rankings on their head. No schools is head and shoulders above the rest in this region, which isn’t to say they aren’t quality clubs, it’s just very balanced.

With only nine teams in the conference, the North Star Athletic Association only gets one guaranteed team to the national tournament.  None of the teams are ranked, nor are they on the cusp of being in the Perfect Game Top 25, so it’s not likely that two teams at most will get a postseason invite. Realistically the NSAA is only deserving of a single entry, but politics and the benefit of the doubt should get them a second school. With that either Bellevue, Jamestown or Mayville State could have the their season come to a close with a quick outer at the conference tournament.

Bellevue was highly ranked in the preseason but could never really get things going and finished with a good, but not great 33-21 record. Should they finally play to their potential they should be able to waltz away with the NSAA Tournament title, but there’s no reason to believe they’re suddenly going to be able to flip on that switch now.

Jamestown has received some love in the official NAIA rankings, but Mayville State won the regular season title outright since their last rankings update and may have usurped the conference’s national support. Neverthless, it was the Jimmies who took four of six from the Comets during the regular season.

The Wolverine-Hoosier Athletic Conference has four teams that would be deserving of advancing to the NAIA national tournament, but depending on how things shake out, only three of the conference’s clubs may be playing. Indiana Tech is a lock and Madonna seems likely, but the Crusaders have stumbled a bit from their hot start. UNOH has been playing in the opposite direction of Madonna, having quietly put together an extremely solid 36-16 season despite starting the year 14-13. Had Concordia been able to win one of their close defeats at Southeastern, it would have put a heck of shine on their postseason chances.

In my humble opinion, Tech and UNOH are the conference’s two best teams and a snub of either should be considered preposterous. It’ll take a deep WHAC tournament run for Madonna and/or Concordia to be able to sleep well the night before national invites are announced. Otherwise one or both could have overlooked.

Lyon and Freed-Hardeman will unquestionably representing the American Midwest Conference, but it is questionable if a third team will make the list. Missouri Baptist and Columbia finished third and fourth in the standings and each have the ability to steal the postseason tournament title and make a dark horse run to Lewiston, but they have to get into the opening round first. Unless either of those teams reach the AMC championship game it seems doubtful that they’ll receive a postseason bid.

The Heart of America Conference will have at least two representatives reaching the opening round, but after Central Methodist, that second invite is completely up for grabs. Clarke had great expectations in the preseason and were in the Perfect Game top 10 to start the year, but failed to improve on last season’s strong run and ended with a 30-20-1 mark. They’ll have to outplay a slew of balanced conference opponents to make sure they reach the final two to secure their spot.

This is unquestionably a conference that allows for a surprise team to make a run at the finals to keep their season going. Evangel, the tournament host who has played a strong schedule, is a strong candidate to capture a bid.

There aren’t any Chicagoland Collegiate Athletic Conference teams that are locks, although it seems likely that Judson will have to tank in the conference tournament not to take one of the CCAC’s two spots. Since the conference doesn’t have a lot of clout it seems that they’ll be limited to one other entry to the NAIA first round. Robert Morris looks on paper to be the team to take the other invite, but despite their overall losing record, Saint Xavier may be the toughest team of the group.

The third in queue in the Appalachian Athletic Conference will be hoping for few upsets in conference tournaments. Bryan and Tennessee Wesleyan will be playing the NAIA first round, but after that Reinhardt will be sweating things out a bit. They’re definitely deserving of an opportunity to keep playing but they seem like a candidate for a snub if automatic bids start getting issued to surprising teams. Point is a team that could steal Reinhardt’s spot as they are better than their record looks.

Despite being in the Perfect Game Top 25 the entire season, Alvernia has surprisingly received little love from the panel of 25 sports information directors and media members which compile the standard D-III rankings. Alvernia earned an at-large bid last season, but another invite seems like a long shot unless they win their conference tournament as they ungraciously received only a single vote in the last media rankings which placed them just inside the top 50. This is despite the Golden Wolves currently having a strong 28-11 record and winning the MAC Commonwealth for the sixth time since 2011.

Alvernia has performed respectfully in the NCAA’s, winning two games last season and three in 2015 which makes their current omission outside of non Perfect Game rankings even more perplexing. If the Wolves aren’t in the extended postseason it would be an absolute injustice. Alvernia was fifth in the last Mid-Atlantic region so they should find their way in, but Ramapo, the sixth-positioned team, has been on a hot streak and could leapfrog them in the rankings.

The same can be said in a similar fashion for La Roche, who won their fifth straight AMCC regular season title. Redhawks have been in the top 10 of the Perfect Game rankings the entire season yet have floated around the second half of the national media Top 25 and were somehow relegated to ninth in the last official Mideast rankings alone.

This is despite the team being 29-7-1 and the winner of 11 of their last 12. With those positions it seems illogically possible that the team could get passed over for a postseason bid. Admittedly those rankings don’t include the Cardinals going 5-1 last week, but the team should have been positioned much higher regardless so La Roche needs to finish strong to avoid being overlooked.

The Centenary Gents have been the most enigmatic of teams this spring. Following a strong 2017 season with the bulk of the roster back, the Gents were positioned firmly in the preseason top 5. Nevertheless, they exponentially dropped from the rankings and were a ho-hum 19-13 just two weeks ago. Yet, they’ve been on a tear as of late, winning six of eight, which included a series over Trinity who had been in the top five themselves. With the wins Centenary earned the outright SCAC regular season title for the third time in four seasons.

What seemed as an unlikely opportunity not long ago, the Gents appear ready to make another run into the NCAA postseason. If they are to channel their ability, which had them revered so highly in the winter, Centenary could be a dark horse to win the whole enchilada.