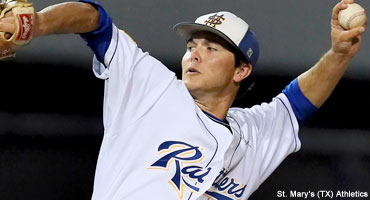 This week marks the end of the regular season for D-II, NAIA and D-III baseball. There are still a few schools that can play their way into the postseason with a run through their conference championship tournament, but for the most part the fate of teams is already being determined.

For teams on the bubble all they can do is wait. For a fortunate few it’s not a question of if, but where, and they’re only waiting to see which dugout they’ll be in as the compete for their division’s championship series. Other teams however are anxiously awaiting at-large announcements, wondering and hoping that their season isn’t over quite yet.

The first small school selections will be made this Friday when the NAIA field is announced. The 46 qualifying teams will be named at 3:00 p.m. CDT with pairings revealed at 6:00 p.m. via a video show. The D-II Baseball Selections will be made via an online presentation as well, revealed on NCAA.com at 9:00 p.m. CDT. The D-III tournament field is slated to be released on at the stroke of midnight on Monday, also on NCAA.com.

As the final selections are being prepared, here are the the up-to-date rankings along with a special look at some teams from each of the three divisions which are hoping to have their seasons extended. All are deserving, but when the music stops these schools could be left without a seat and have to pack their bags to head home instead of moving to a dugout.

Rankings are based on games through Sunday, May 3.

There’s something about St. Mary’s that the NCAA rankings committee doesn’t like, and for the life of me, I’m not sure what it could be.

The Rattlers have been ranked in the Perfect Game D-II Top 25 all reason and pretty highly to boot. They started the season 17th, and after a somewhat wonky start dropped to 21st, but then immediately rebounded and made a beeline for the top 10. The team has spent much of the spring in the top half of the rankings and for a month and half StMU was ranked in the top 10. Nonetheless, the team is fighting for a spot in the the South Central Region. In last week’s official NCAA college baseball rankings, the Rattlers were positioned seventh and would be on the outside looking in if the six-team regional tournament were decided today.

I get St. Mary’s being behind Colorado Mesa; they’re arguably the best team in the county, but the Rattlers are feasibly just as good or better than anyone else in the region.

The Rattlers tied with St. Edward’s for first place for the Heartland Conference regular season conference title and the Snakes won the head-to-head series two games to one. CSU-Pueblo was ranked third in the NCAA’s last week, but their rank is heavily weighed on their strong start. The Thunder Wolves started the season 25-3, but have gone 13-9 since April 1. They’ve only played one ranked team, CMU, and went 1-3 in those contests.

West Texas A&M is ranked well above StMU, but the Buffs, have a lower overall, region and conference winning percentage than the Rattlers.

The biggest head scratcher is why Tarleton State was ranked above St. Mary’s. As of last week, the Texans only had a 20-20 record overall and were 13-16 in their conference. Admittedly, TSU could boast a 4-1 record against the Rattlers, but that’s more likely one of those situations where a better opponent just doesn’t have luck against someone they should be able to beat. Kinda like how Squirrel Girl and her sidekick Tippy-Toe were able to defeat Thanos and save the universe. That’s a bit of an exaggeration on each end – and quite a nerdy one – but apropos nonetheless.

A decent showing in the Heartland Conference tournament should get the Rattlers in, especially since Tartleton went 0-3 last weekend and St. Mary’s going 3-0, but the Rattlers need to be concerned nonetheless. With only six spots available in the regionals, an overachieving underdog in any of the three affiliated conferences could steal their spot and send them home for the summer.

Southeastern was a top personal pick of mine to go deep into the NAIA postseason in 2015. The Fire were 15 outs away from going to the NAIA World Series last season and many of the key position players and pitchers were back on campus this year. Ranked eighth to start the season, the Fire looked like a good bet to advance to their first National Championship game in May, but as of now the Fire are anxiously awaiting to see if their season will continue after a good but not great year on the diamond.

SEU has accumulated 38 wins so far this season, but their 19 losses are a bit bulky. Unquestionably the Fire have played a schedule that has them ready to compete for a a regional and national title. The Fire have played games against three D-II teams that have been ranked nationally, including perennial powerhouse and preseason No. 1 Tampa, and five clubs that have spent time in the NAIA Top 25. Included in those games were multiple wins against Embry-Riddle, Northwood, Davenport, St. Thomas and USC Beaufort.

Needing every win to boost their résumé, the Fire were looking good on Monday to advance to The Sun Conferenc championship game after a two-out grand slam gave them a 4-1 lead in the fifth inning over St. Thomas. But the Bobcats bounced back and and eliminated SEU from the tournament with a 2-2 record. The Fire need to wait until the NAIA pairings are announced Friday to learn if their championship dreams are extinguished.

Another club which will be anxiously waiting for an extended postseason invite is Freed-Hardeman. The Lions were a bit of darkhorse to start the season, but showed they were a team to be reckoned with by the end of the year as their young players gained experience and confidence. The Lions won the American Midwest Conference regular season title, their second in the last four years, and finished with a 35-14 record. However the Lions failed to reach the championship game where they would have earned an automatic bid, with Missouri Baptist and Lyon instead getting the passes to advance. Now the Lions must hope for an at-large berth.

The emergence of Northwestern Ohio helps FHU’s cause as the Lions played a tight series with the 11th ranked Racers at the start of the season. The Lions also split their four game season series with Perfect Game preseason No. 1 Missouri Baptist, a favorite of mine, but a team that hasn’t been getting much love in the NAIA coaches’ rankings. FHU also has a win over Lyon, another team that has been coming on strong at the end of the season. One big, big blemish against the Lions is their record against William Woods. The Owls could get the nod over FHU as WWU went 3-0 against them. Thus, if the AMC is going to get a third team into the NAIA extended postseason, the Owls could usurp their bid.

IMHO, Freed-Hardeman deserves an invite to play-on, but I wouldn’t be shocked to see the 18th ranked Lions season come to a disappointing close this week.

Emory was the top team in the preseason Perfect Game rankings for a slew of reasons. The Eagles and Head Coach Mike Twardoski have a strong tradition of top caliber clubs, were the D-III runnerup last season and returned a wealth of top talent from last year’s near-national championship club. Emory also had a developing Pitcher of the Year candidate in Jackson Weeg whose 2.03 ERA as freshman last season was the second-lowest for any pitcher in team history who threw at least 40 innings.

After starting the season 5-0 with wins over nationally ranked Webster and Rhodes it appeared the Eagles’ preseason No. 1 prophecy was going to be fulfilled; however the train quickly fell off the tracks on the way back to Lewiston. EU stumbled through 8-9 stretch where they hardly looked like championship material. Despite their struggles the Eagles weren’t removed from the Perfect Game rankings; however their position in the Top 25 was made more on potential than results.

The Eagles flew right the second half of the season, going 13-3 to close the year with wins but whether it will be enough to earn them a second-straight postseason appearance remains to be seen. As the D-III tournament field is being prepared for announcement on Monday, Emory can point to their top 10 strength-of-schedule ranking which included games against aforementioned Webster and Rhodes as well as Birmingham Southern and Case Western to help get them an at-large bid. However it may not be enough to keep them playing in 2015.