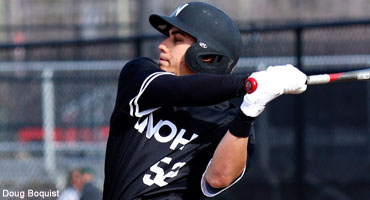 In small school diamond action it was the kind of week prognosticators hope for; few upsets mean little shuffling had to be done in the rankings’ positioning. When teams play as anticipated and win their games it doesn’t allow for much rearranging of the teams. The Top 25 can simply can made by doing a quick CRTL+C, CRTL+V for the week.

Now of course it wasn’t that easy. There were a number of changes done in each of the three divisions and clubs were swapped out at the tail end with deserving teams that had narrowly missed the cut last week.

There was one major change at the D-II level where Seton Hill was dethroned as the top team. The Griffs had been taking care of business all season long, but lacked a signature win over a top team which definitely marked them as the team to beat. After barely earning a split over unranked Slippery Rock it was decided to put a new team atop the D-II rankings – a club with nearly equal overall record, but with many more quality wins.

In the NAIA the top half of the rankings remained the same. However it shouldn’t be expected next week. Several top teams will be pitted against each other in the upcoming schedule, including a series of top northern teams this weekend in Michigan, which could create a number of shakeups in the next update.

At the D-III level each of the top five teams remained the same as well, but there are some teams on the rise that could bully their way into the elite handful of schools by the next update.

Rankings are based on games through Sunday, April 12.

Seton Hill’s No. 2 preseason ranking and the Griffs’ subsequent taking over of the top spot a month ago was a decision based more on potential than results. SHU reached the D-II National Championships last season and lost only a few players from the school record-breaking club. In fact, the team looked to be even better as statistical and clubhouse leader Pat McCarthy returned to the diamond after missing 2014 after a near death experience. This season, the team has played pretty much as projected. They had only four losses headed into last week, each by a single run, but they have few signature wins to support their ranking’s résumé. None in fact. Their most remarkable opponent has been Winston Salem State, a team that only skirted the Top 25 this year, and SHU could only manage a split with the Rams.

This past weekend was to be another good measuring stick for the Griffs. They matched up with a good, but not great, Slippery Rock club in a PSAC slugfest; however, once again SHU could only leave with an unsatisfying split. The pair of losses opened the door for another team to usurp the SHU’s No. 1 position. With that being said, the new No. 1 team is the Nova Southeastern Sharks.

Few teams can claim as many impressive wins this season as NSU. In addition to sweeping series against quality opposition such as Delta State ad Southern New Hampshire, the Sharks have swept St. Leo and Florida Southern, two teams that were once been ranked in the Top 25, and recently won back-to-back series against preseason No. 1 Tampa and Florida Tech.

With no remaining games scheduled against ranked teams and the lack of a Sunshine State Conference tournament, the top spot in the South Regional is NSU’s to lose. Provided they keep their foot on the gas for the rest of the season, the Sharks have an excellent opportunity to host the regional and advance to the D-II CWS for the first time in school history.

The Sharks’ ascension to the top spot isn’t the only story worth mentioning this week. Two teams entered the rankings for the first time this season on the heels of impressive weekends. North Georgia is in the Top 25 for the first time at 20, and West Alabama makes their debut at 22.

North Georgia is the surprising leader of the always-competitive Peach Belt Conference. The Nighthawks finished 2014 with a 22-27 record, but have been on the sunnyside of .500 since mid February this year with no signs of looking back. After an inauspicious 2-4 start, UNG has played steady ball all season, sweeping Columbus State and USC Aiken and also earning wins over formidable foes UNC Pembroke, Armstrong and West Florida.

West Alabama has the nation’s longest active winning streak, an 18-game run that will be tested by West Florida this weekend. The Tigers’ schedule has been relatively soft so far this season which is preventing them from climbing too high in the rankings, but they’ll have plenty of opportunities to prove their worth with a strong close to their schedule. In addition to hosting UWF this weekend, UWA welcomes Alabama-Huntsville, a team that’s been in the top 10 all year, in the season finale.

Preseason top six-ranked Southern Arkansas, found its way back into the rankings this week as well.

The rankings in the NAIA may have established a new record in inactivity. The top 13 teams all remained the same as they went 46-9 on the diamond to leave little room for movement.

Last week’s marquee NAIA matchup happened in Omaha where a pair of top 15 teams met on the diamond when Bellevue hosted Oklahoma Wesleyan. The Eagles had their 12-game winning streak stopped, but took three of four games in a hotly contested series from the Bruins. The first three games were all within a run headed into the final inning and could have been swayed either direction. The finale was punctuated by a complete game two-hit shutout gem by OKWU freshman Aaron Garner. Garner’s collegiate debut has been a real boon for the Eagles as they’ve jockeyed for a spot in the top five all season long. While he’s only fanned 15 batters in 44 innings, he’s held opposition to a .222 batting average and is a perfect 6-0 with a 2.45 ERA.

Unquestionably, the showcase showdown this weekend will be in Michigan when Davenport hosts Northwestern Ohio. The two teams are a combined 68-11 and are ranked Nos. 5 and 17 respectively.

Davenport recently ran up a school-record 24 wins and are tops in the NAIA in batting average and second in slugging percentage. Despite all their wins, the knock against them is that they don’t have a cache of victories against ranked clubs; nevertheless DU can claim a pair of wins over Point Park and the Panthers mauled Embry-Riddle early in the season. Before their streak-ending loss last weekend, Davenport hadn’t lost since February, and their two prior losses had been by a combined three runs.

Northwestern Ohio was a darkhorse pick that appeared disastrous at the beginning of the season. The Racers started the year 2-5, but have gone 21-1 since and have been a fueled by a potent and dangerous offense and stellar bullpen. UNOH ranks in the top five in batting and is third in stolen bases. Closer John Schreiber and setup man Ryan Carter have dominated the late innings. They are a combined 5-0 with a cumulative 1.20 ERA and 61 strikeouts in 52 1/3 innings pitched.

Two new teams to the rankings are LSU Alexandria and Lyon. They replaced Southeastern who has been slowly sliding down the rankings all season long, and William Woods, who’s only Top 25 rankings appearance was limited to a brief 24th place cameo last week.

The big story in D-III is the skyrocketing, red-hot Frostburg State. The Bobcats have been a consistently good team the past decade but hadn’t quite broke the ceiling of being one of the nation’s elite. The Bobcats left little doubt of their credibility last weekend.

Frostburg earned the No. 1 seed in the capital Athletic Conference for the first time after taking two games from previously unbeaten Salisbury. The Bobcats pounced all over the Sea Gulls 10-0 in the opener and earned an extra-inning win in the second game. With the wins, along with a Sunday victory over Penn State Altoona, the Bobcats’ record improved to a stunning 27-3. They also have valuated into the top 10 after starting the season unranked.

The Bobcats’ success can be attributed to an all-around effort with strong hitting, pitching and defense. However, extra kudos should be given to the starting pitching trio of Bennett Schiltz, Clayton Freimuth and Greg Schneider. All have ERA’s below 2.20 with Schiltz posting an especially dainty 1.45 mark. Freimuth has been brutal to opposing batters’ statistics, fanning 63 batters in 45 2/3 innings while only allowing 27 hits.

One new team was added to the rankings as Wooster made its way into the Top 25. Frank Vance, the Fighting Scots’ senior third basemen, hit for the cycle in a game that gave Wooster a series win over Wabash. Vance is leading the team in hitting at .398 and incredibly has nearly as many triples (6), as strikeouts (8).