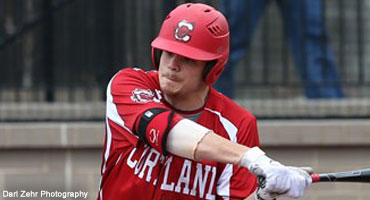 A win late in the season is worth as much as it is in February or March, but it sure doesn’t seem like it. With only a few weeks left on teams’ schedules the magnitude of each out escalates as top seeds and tournament spots are filled. Even for teams at the top of the national rankings whose postseason berth is all but assured every game matters as they jockey for regional positioning and the opportunity to host games.

There wasn’t much movement in the overall rankings this past week, which likely represents the calm before the storm. This is the last chance to make an impression and every advantage will be sought these next few weeks as teams compete for every advantage headed into the extended postseason. Even for clubs whose championship dreams have been lost a long time ago. The intensity on the diamond will crescendo, seniors want to end their collegiate career on a high note and schools in the second half of the standings love to ruin a rival’s chance to have a deep, successful postseason run.

With that being said, here’s a look at the latest Top 25 rankings with an extended look at the teams vying to be the top club in each of the three small school divisions.

Rankings are based on games through Sunday, April 19.

Despite a disappointing week which included a pair of losses, one of which was to the Sunshine State Conference’s last place Rollins Tars, Nova Southeastern remains the top team in the D-II rankings, albeit by the slimmest of margins. There was strong sentiment to have Colorado Mesa bump the Sharks from the No. 1 position, especially following the Mavs dismantling of Colorado Christian in which they nearly averaged 15 runs per game, but CMU only narrowed the gap and didn’t eliminate it. Had either of NSU’s losses been on their home field, or if the CCU Cougars been a more worthy adversary, it may have been enough to tip the scales.

The two teams are realistically ranked 1A and 1B overall (with Franklin Pierce an essential 1C). As it is now the Sharks are still the top ranked team based on their overall body of work this season. They’ve played over 20 games against teams that have been positioned at one time in an organization’s Top 25 rankings, while CMU only has faced one ranked opponent, CSU-Pueblo, since February 21st, and the Thunder Wolves have only managed an 8-6 record in April. Nevertheless, the Sharks need to finish their schedule in style. They close the regular season with series against Eckerd and Barry, two teams under .500 overall and in the bottom half of the SSC standings. With a suddenly resurgent Tampa, NSU can’t afford to give away any games if they hope to host the South Regional.

It’s unfortunate that third-ranked Franklin Pierce has played stronger this season to see what the Ravens are really made of. FPU’s pitching staff has put up numbers that are nothing short of remarkable, regardless of the level of competition. The Ravens have 11 shutouts and are holding opposition to a miniscule .189 batting average with a 1.90 ERA and only one Franklin Pierce pitcher who has thrown over 10 innings has an ERA over 2.10.

However FPU has played only a pair of games against teams that have been in the Perfect Game rankings this season. They split two with Mount Olive, but to the Raven’s credit, they did so with their Tomko Award semifinalist Brendan O’Rourke and one on the heels of an exhausting spring trip in which they played seven games in four days. Had the perennial Northeast power been at full power, they may have swept the games from the UMO Trojans. Nonetheless, it will take an incredible underdog performance by someone to keep Coach Jayson King’s team from earning a trip to Cary for the sixth time in 10 years.

Speaking of quality pitching, there have been some absolutely phenomenal performances on the West Coast, especially from two teams in the Perfect Game Top 25 in ninth ranked Cal Poly Pomona and 18th ranked UC San Diego.

The CPP Broncos are the only team with a pair of pitchers that were named Brett Tomko Award semifinalists for D-II Pitcher of the Year. Cody Ponce has been receiving attention all season after he had a breakout summer which vaulted him to the top of draft boards. After not allowing an earned run in a win Saturday Ponce lowered his ERA to 1.35. He’s only allowed four extra-base hits and five walks in 33 1/3 innings while striking out 39.

Broncos’ teammate Ryan Olson has been just as dominating, if not more so. He has a perfect 7-0 record, 1.72 ERA and has limited opposition to a .195 batting average.

However no pitcher may be as impressive West of the Mississippi as UC San Diego’s Justin Donatella. Donatella cooled a hot Cal State Stanislaus team on Friday and has now been a part of six of the Tritons’ 12 shutouts. He has a 0.55 ERA and in 65 1/3 innings he has only allowed 33 hits while striking out 88 batters. This week he won his third California Collegiate Athletic Association Pitcher of the Week Award. That’s quite an accomplishment for a conference stuffed with top talent.

Only one exchange of teams was made in the rankings this week as a slow and steady Millersville makes their way into the Top 25 for the first time this season. The Marauders have been overshadowed by highly ranked Seton Hill and the winning ways of Mercyhurst but will be serious contenders for the Atlantic Regional title. MU replaces Flagler, a still formidable foe, but a team that has cooled off from a hot start of the season.

After spending the entire season in the top three the Oklahoma Baptist Bison made the move to the top spot in the rankings. Like with the D-II level, it was a difficult decision between three deserving teams, especially between the reigning No. 1 team and a team right on their heels.

Like Nova Southeastern, Faulkner has played a more difficult overall schedule and has more wins over ranked teams. Furthermore, similar to Colorado Mesa, Oklahoma Baptist has a near perfect record, but not as meaty of a schedule. However in this instance the No. 2 team has usurped the No. 1 spot. OBU has two wins over top 10 teams in the past month, but more impressively, leads the NAIA in both batting average and slugging percentage as a team. They also have a well-rounded club with a team ERA that puts them in the top 30 and a fielding percentage that ranks them in the top five. The margin between the Bison and Faulkner is slim, but for now OBU gets the top spot in what could almost be considered a coin-flip decision.

A team which is gaining ground and shooting up the rankings is Oklahoma City. The Stars won a tightly contested series with OBU at the end of March and can also tout wins over Bellevue and Tabor. They also won an insane 22-21 game over Oklahoma Wesleyan, who at the time of this writing was not considered for the rankings. Should they impressively dispatch Mid-America Christian this upcoming weekend they’ll be a strong contender for the No. 1 position next week as well.

No team had a bigger week than Northwest Ohio. The Racers nearly swept Davenport on the road as their only loss in the four-game set occurred when they let a three run lead slip in the bottom of the last inning. Three of the four games were decided by a single run and one of them went into extra innings. With the wins the Racers jumped five spots to reach the top dozen. UNOH has an exciting, electric offense that keeps pitchers and catchers on edge. In addition to being a top 10 team in batting average, the Racers are in the top five in stolen bases thanks in large part to their speedy outfielder Jose Cruz, who is batting .443 with 22 stolen bases on the season. It also probably helps that one of the Racers’ assistant coaches is former MLB All-Star Carlos Baerga whose son plays on the team.

New to the rankings this week are Freed-Hardeman and Westmont, two clubs that had been on the brink all season and finally make the list after impressive wins against top 10s caliber clubs.

Prior to the season FHU Head Coach Jonathan Estes remarked that they had a young pitching staff and if they were to pitch as well in the spring as they did in the fall, the Lions would be a top 20 team by midseason. It’s a couple of weeks past the midway point, but Freed-Hardeman’s ascent appears to be about as projected. Last weekend the Lions took two of three from preseason No. 1 Missouri Baptist to make the jump into the rankings.

Westmont make a move into the Top 25 after winning two of three over The Master’s. The wins avenged a series loss the Warriors suffered to the Mustangs earlier in the season.

While the top position in DII and the NAIA are debatable, there seems to be little doubt that the team to beat in D-III is the Courtland State Red Dragons, who are the top team for the fifth week in a row. After starting the season ranked 10th, Cortland has amassed a lopsided number of wins and ended the weekend with a ridiculous 27-2 record. Last week the Red Dragons outscored their opposition 81-13 and locked up SUNYAC Tournament hosting duties as this was being written. One of the wins was via a walk-off triple-play.

No teams were added or removed from the rankings this week, but one top preseason power is barely hanging on. After starting the season in the top 10, creeping up to No. 5 at one point, St. Thomas has been playing un-Tommie like baseball as of late. They’ve dropped in the rankings the past three weeks and have a 17-11 record after going 2-6 since April 8. A doubleheader loss on Saturday marked the first time they lost both ends of a MIAC twinbill in their last 42 matchups. Wins against first place Bethel could be just what UST needs to get back on track.