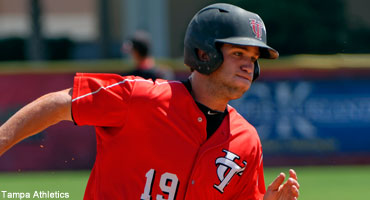 The Tampa Spartans were an easy pick for preseason No. 1 team. They were coming off a crazy insane 54-4 season and had almost their entire starting lineup coming back to campus for another run to Cary. However for a good part of the spring, the team didn’t look like they would come anywhere close to meeting their lofty preseason prognostications.

Out of the gate UT performed up to usual standards. They won 14 of their first 15 games with their only loss being to the reigning D-II champs, Southern Indiana. Also wedged in among their wins was an exhibition victory over the Philadelphia Phillies.

However something weird started happening, Tampa started losing, and quite often. During a midseason stretch the club went a very un-Spartanlike 11-10. In one week’s time Tampa lost as many games as they did in all of 2014. UT never left the Perfect Game top 10 as it was believed to be a glitch in the matrix, but the Spartans were exiled completely from the NCBWA Top 25 for a two week period; that’s a rare occurrence for the perennial power.

Nevertheless the Spartans got their groove back in a big, big way. They finished the regular season plating double-digit runs in seven of 11 games and kept right on truckin’ into regional play. They went undefeated in the South Regional to earn their 17th regional championship and earned an invite to North Carolina and the D-II National Championships for the third consecutive year.

While in Cary Tampa performed like true champions. In the opening game they faced potential first-round draft choice Cody Ponce and scored seven runs against the top-shelf Cal Poly Pomona staff for an extra innings win. After that the UT pitching staff completely dominated in Cary.

Despite having a down year (at least on paper) on the mound with a season staff ERA well north of 4.00, Tampa pitchers tossed complete game four-hitters in two of their final four games and held opposition to a total of eight runs scored in four games.The wins gave Tampa its seventh baseball national championship and Coach Joe Urso earned his fourth title while at the helm of the Tampa ship.

Just as in D-II, a traditional power came home (or stayed home as it would be) with the title. For the 17th time in school history Lewis-Clark State earned the NAIA championship.

The Warriors played really, really good, but not great, all season long. They started the season ranked 12th and spent the entire spring floating between the Nos. 7 and 12 positions in the rankings. They’d lose a game here and there which would make one wonder if they had the muster for another title run, but just when you’d doubt their moxie they’d churn out a lopsided 22-1 or 20-3 win to eliminate all doubt that the LC Warriors were a team worthy of the title.

LCSC had an amazing roller coaster ride in the NAIA World Series. After winning their first two games over Davenport and Concordia, the Warriors were sent to the loser’s bracket by Faulkner by virtue of a defeat in a 12-10 barnburner. The Warriors would have to win their next three games against a trio of some of the best teams in the nation to earn their first title since 2008.

LCSC’s Ty Jackson had the kind of game you tell your grandkids about when he helped shutout Embry-Riddle for the first time all season. He threw almost eight innings of goose eggs and hit a home run as the designated hitter to earn the game winning RBI. The loss not only ended ERAU’s time in Lewiston, but was the last game for the Eagles as an NAIA team as they will transition to D-II next season.

The semifinal game was a rematch against Faulkner and the Eagles jumped out to a quick 5-0 lead against the host Warriors. Despite a strong comeback by LCSC, Faulkner was winning headed into the bottom of the seventh inning. Hometown hero Beau Kerns, who went to high school in Lewiston, was able to keep the lid on the Eagle’s offense and allow his team to earn the comeback win as he earned his 12th win of the season and advance the Warriors to the championship game for the 24th time in program history.

In the championship game it appeared that LCSC would finish up as bridesmaids for the third consecutive year. St. Thomas, who was playing for their first title in school history, was up 7-1 after five innings, but Bobcat starter Ben Ancheff had to leave the game with tightness in his shoulder. The Warriors were then able earn the largest comeback in championship history, finishing with a 10-7 win and a dogpile on the mound to celebrate the win.

Cortland won its first national title in such a convincing fashion that not even the fit-crazed dentist who doesn’t recommend sugarless gum can refute their awesomeness.

After starting positioned 10th in the preseason rankings, the Red Dragons took over the top spot mid-spring as they throughly steamrolled opposition all year. Cortland finished the season with a 45-4 record and in almost half of their wins they scored double-digit runs. Among their wins were six shutouts and nine times they outscored their opponent by at least 10.

At the D-III World Series Cortland twice faced Frostburg State, a team that tore though teams themselves and ultimately finished the season second in the rankings with a 43-9 final record. In those two games the Dragons dominated the Bobcats, winning the contests by a combined score of 21-5.

In the championship game against UW-La Crosse, Cortland was trailing 2-1 in the ninth inning but rallied for five runs to take the lead, win the game and earn the title. The decisive runs were plated against Eagles’ bullpen ace Jameson Sadowske who had only given up three earned runs all season for a sub 1.00 ERA and perfect 5-0 record, that is until the Dragons blemished it.

The Dragons had been a frequent visitor to the D-III version of the CWS and were making their 13th appearance in the last 20 years. Each time Cortland went home without the championship trophy, with their best finishes being in 2005 and 2010 when they were the runnerups.

It was a bittersweet victory for the Dragons who were playing in their first championship series since the passing of their former coach Bob Wallace. Wallace had been a longtime supporter of Cortland baseball and the Dragons had displayed the letters “BW” on the backs of their hats this spring in his honor.