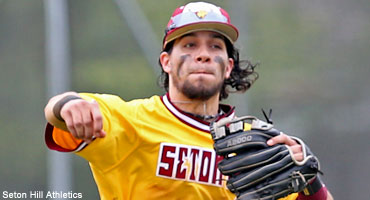 Baseball is unquestionably a team sport. No pitcher, no matter how dominating, can take to the mound without a solid defense behind him and a capable lineup for run support. Neither can any hitter, despite how many baseballs they’re able to blister, win a game without being able to stop the other team from scoring or the ability to put the ball over the plate in a fashion that keeps the other team from crushing pitches like a home run derby. Nonetheless, a single player can make a good team great. By leadership in the dugout or their play on the diamond they can motivate their team to be better.

This week, instead of doing a recap of action on the diamond, we’re going to take a quick look at some small school players who have been difference makers for their teams.

It’s important to note that being a lower division player doesn’t mean they are a lower caliber player. There are a number of players in professional baseball, including in the major leagues, whose career was boosted and benefited by time spent on D-II, NAIA and D-III fields.

J.D. Martinez, who had a breakout season for the Detroit Tigers last summer batting .315 with 23 home runs, starred at Nova Southeastern. Ryan Vogelsong, who now has a pair of World Series rings, pitched at Kutztown. Jordan Zimmermann, who threw a no-hitter for the Nationals in the final game of the regular season last year, was a pitcher for D-III UW-Stevens Point.

Sometimes the best fit for a player is a school closer to home or simply one that just feels like home. If a player is good they’ll be noticed. Scouts look under every rock and in every nook and cranny for talent, as professional caliber players will get a chance to play professional ball no matter whey they spend their college years.

With that being said, with each updated rankings are a handful of players from ranked teams to keep an eye on this season and beyond. They’ve helped elevate their clubs into the national rankings and if they continue to up their game you’ll be seeing them play at a professional diamond near you.

Rankings are based on games through Sunday, April 5.

Nick Sell, Seton Hill Griffins
Ever since his freshman season Sell has been an absolute beast for the Griffs, helping SHU to its first ever D-II Baseball Championships last season, and they’re well on their way for a second appearance this year as the top team in the nation. Sell has a thunderous 1.1071 slugging percentage, compiled on the back of a .469 batting average with 31 extra-base hits that includes a school single season record 17 home runs.

Brendan O’Rourke, Franklin Pierce Ravens
Franklin Pierce has a tradition of recruiting and developing top arms and O’Rourke is looking like he could be one of the best of the long line of top Raven hurlers. He started the season throwing 27 scoreless innings and has only allowed a pair of runs all season. For the year he has been the winning pitcher in each of his seven appearances thanks to his dainty 0.21 ERA and 53 strikeouts in 43 1/3 innings while only allowing a measly 18 hits.

Collins Cuthrell, UNC Pembroke Braves
Granted he was injured for most of last season, but Cuthrell’s 2014 highlights included walking twice in a game and compiling a .158 slugging percentage. This season Cuthrell has been posting monstrous numbers that not even Nostradamus could have anticipated. He’s led the Braves into the thick of the hunt for the top of the competitive Peach Belt standings and into the national Top 25 rankings with his .453 batting average and 18 home runs.

Justin Donatella, UC San Diego Tritons
Donatella has only allowed a run to score in three of the eight games he’s started this season. Twice he fanned 11 batters in a game, the first of which came during a one-hit complete game gem against Cal State East Bay. For the season he’s compiled a 0.70 ERA and only allowed 27 hits in 51 1/3 while holding opposing hitters to a .149 average. He also displayed great control, only allowing 11 walks while striking out 70 batters for a near 7-to-1 ratio.

Craig Brooks and Will Albertson, Catawba Indians
In just 68 1/3 innings this season Brooks has fanned 108 batters while only allowing 30 hits. In other words, for each hit allowed, the Catawba ace has struck out three. He has an 8-1 record with a 1.32 ERA and is also batting a handsome .304 as the team’s shortstop when not pitching.

Albertson is leading D-II in home runs by mashing 19 balls over the fence so far this season. Perhaps even more incredible is that he is doing it while batting .503 and earning his stripes on the diamond as the handles the pitching staff as the team’s regular catcher.

Orlando Olivera, Missouri Baptist
The anticipated offensive production of Olivera is one of the major reasons why the Spartans were the top team in the Perfect Game preseason rankings. Olivera hasn’t disappointed and has been the straw that stirs the MBU drink all year. He’s currently in the NAIA top 10 in hits, home runs and RBI per game and is just outside the top 10 in slugging percentage and batting average at .769 and .438 respectively.

Osvaldo Gonzalez, Bellevue Bruins
Gonzalez played at Appalachian State last season where he never quite found his groove at the plate despite supplying solid defense behind it as the Mountaineers’ catcher. After a transfer to Bellevue, the Bruins’ catcher has absolutely erupted offensively. He leads the NAIA in slugging percentage at .902 and is second in batting at .478. Thanks to his 10 home runs and 26 doubles, he’s also tops in total bases with 121.

Tremayne Hardin, Auburn Montgomery Warhawks
Hardin led Southern Poly State to the NAIA World Series last year, but when the school folded the baseball team following the season, the talented and speedy shortstop was left looking for a new team. The Hornets demise has been an absolute boon for the Warhawks. Hardin won SSAC player of the week recently and helped AUM improve to 20-1 as he is leading the club with a .376 batting average and has stolen 32 bases in 40 games. He also has a solid mitt, tallying 100 assists and 51 putouts at shortstop with only 13 errors.

Zac Grotz, Embry-Riddle Eagles
Grotz has bounced around from team to team during his college career looking to find a niche and make his mark on the mound. After a disappointing year at Tennessee last season he has flourished for the Eagles. He is in the top 10 in ERA at 0.84 and saves with seven and also has six wins. He hasn’t allowed a run in a month despite making 10 appearances and has limited batters to a .169 average while striking out over a batter per inning.

Tyler Mark, Concordia Eagles
After earning Northwoods League All-Star accolades over the summer, Mark has continued to impress for the Eagles after transferring from Cal State Dominguez Hills. He’s earned 16 saves this season and earned either the save or win in his last eight appearances. Mark has wowed scouts with his fastball and developing slider while holding the opposition to a .138 batting average and has fanned 40 batters in 28 2/3 innings with only five walks.

Mikole Pierce, UW-Whitewater Warhawks
Pierce played all of last season with a torn labrum in his arm yet still was one of the best hitters in the country and helped UWW win the D-III national title. A mended Pierce is back to blistering baseballs this spring as the Warhawks look for another title for their trophy case. In 17 games he has 13 extra-base hits good for a .839 slugging percentage that puts him in the top 25 nationally.

Blake Stevens, Birmingham Southern Panthers
The Panthers have been ranked in the top four all season and a big part of their success has been due to hurler Blake Stevens. In eight starts he’s tossed 54 innings while only allowing 36 hits yet has fanned 66 batters, which puts him in the top three nationally. Twice he has thrown shutouts and his 0.83 ERA is second for pitchers who have amassed at least 50 innings pitched for the year.

Derek Hendrixson, Heidelberg Princes
The Princes were one of the last teams left out of the initial D-III rankings to start the season, but if it had been known what kind of increased impact Hendrixson would have on the mound they most definitely would have been squeezed in somewhere. The sophomore impressed last season, but has been absolutely ridiculous out of the bullpen in 2015, going 3-0 with six saves in nine appearances. In 21 innings he has only allowed 12 hits and three walks while fanning 34 batsmen.