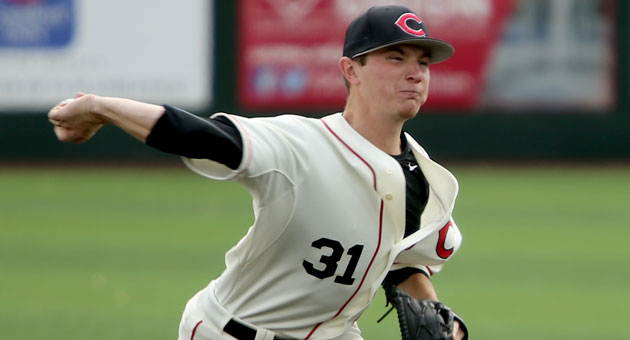 These are, for all intents and purposes, the last rankings that have any substance as far as the rest of the season plays out. In the next few days the final decisions will be made as to who’s in and who’s out. There are no more quality wins to be earned or style points to be awarded.

The time is up. Put down your pencils, turn your scorecards over and wait to see if you’ve been awarded an official invitation to play in the postseason.

The NAIA opening round qualifiers and pairings will be announced on Friday. The D-II selection show is penciled in for Sunday and the D-III playoff field will be revealed Monday. From then on, who’s better than who will be decided on the diamond rather than debated on Twitter or websites.

There are still a few more games to be played until then, and some extremely meaningful ones at that, as many conference tournaments are currently being played or will have the first pitch thrown soon. The final regular season rankings will be posted next week along with predictions as to which schools will be headed to their division final championship series.

Rankings are based on games through Sunday, May 8.

Long time D-II stalwart Central Missouri (the leader in wins of the 21st century if I’m not mistaken) hasn’t been in the Top 25 much the past two seasons, but a Mule victory renaissance has taken place in the Show Me State. UCM easily captured the MIAA regular season crown and should be confident of getting an NCAA bid regardless of the conference tournament.

Last week senior slugger Bennett Oliver launched his school single-season record 20th home run as the Mules swept a sneaky good Washburn club and climbed into the top 15 of the rankings. Oliver’s offensive outburst has been a welcome addition to the team’s run scoring arsenal as the well-traveled batsman has found a home in Warrensburg and in the heart of the Mules’ lineup. Oliver started his college career at Purdue, but diminishing playing time spurred a move back near home to Hutchinson Community College. There the former shortstop earned a gold glove as he transitioned to first base and led the team in extra-base hits. His standout performance spurred the move to middle Missouri. Oliver also topped UCM in home runs last season, but with a light-hitting lineup, it only took his half dozen homers to lead the pack.

The Mules also have a bonafide ace in Ethan Westphal. Aside from one outing, Westphal has dominated all season long, tossing three complete games with his eight wins. Despite pitching in the hitting friendly fields of the MIAA – where 11 of 14 teams are batting at least .294 – Westphal has a 2.96 ERA and is leading the conference with a opponents’ batting average of .211. His 82-to-22 strikeout-to-walk ratio isn’t too shabby either.

In the northeast, the always pitching prolific and fourth-ranked Franklin Pierce Ravens put on an offensive display to end their regular season. Against St. Anselm and St. Michael’s, FPU scored 44 runs in four games while holding their opponents to a half dozen runs. It’s a sure bet the Ravens won’t let their foot off the gas pedal as the postseason approaches. FPU had a magnificent 48-4 final record last season which ended with two untimely upset losses in the East Regional Championships. The Ravens have almost an identical record this season at 44-4 and currently are in the midst of a 16-game winning streak. With no CACC or ECC teams appearing to be title threats, Southern New Hampshire is the only team on paper that seemingly has the firepower to stand in their way.

SNHU touts an obscene 41-5 record themselves and are the only team which has been able to hand the Ravens’ ace Paul Covelle a loss this season. For each of FPU’s unimaginable stats, the Penmen’s numbers are just as gaudy. Franklin Pierce tops the nation with a 2.20 team ERA, but SNHU is close behind with a 2.84 mark, which places them fifth. Both pitching staffs have far more strikeouts than hits allowed with both averaging just under a strikeout per inning.

While FPU edges SNHU on the mound, the Penmen have the advantage on the plate. SNHU leads the NE-10 the three slash line categories, with FPU ranked second in each. The Penmen also have a third-in-the-nation 144 stolen bases, which sounds like something they’d have an advantage over FPU in, but the Ravens are blowing the pants off the nation in that category, with 210 on the season, thirty percent more than any other team.

Aside from a four-day stretch in late Match, second ranked Tampa’s losses this season have been to Nova Southeastern (ranked sixth) West Florida (ninth), Florida Southern (20th) and the Philadelphia Phillies. It’s difficult not to put the Spartans first in the rankings, but UT also has the disadvantage of competing in what will once again be the most grueling of regions. Winning two of three against Rollins to end the regular season should secure home field advantage in the region for Tampa, which would be a monstrous advantage as they look to defend their title and win their 16th national championship.

The most captivating and volatile results last week took place in the Sooner Athletic Conference where five teams faced off with results that should shape the announcements of the national NAIA field this Friday. Headed into the tournament Oklahoma City, Texas Wesleyan, Wayland Baptist, USAO and Southwest Christian were all hoping to secure postseason bids, but once the dust settled it appears that at least two of those teams likely played their last out this season.

USAO earned the conference’s automatic bid after Wayland batters struck out 18 times and gave up four unearned runs to hand the Drover’s their first SAC Tournament title. Despite the title game loss, the Pioneers should get an at-large bid as they rallied off a win against OCU and two more over Texas Wesleyan to reach the title game. For the other three hopeful teams, the outlook isn’t near as optimistic.

Southwest Christian was steamrolled 16-3 by USAO to get eliminated from the tournament after losing the opener to Mid-America Christian. SCU only has 12 total losses this season, but five of them were in the past two weeks, which isn’t the kind of finish a bubble team wants to have on their resume.  Texas Wesleyan will unquestionably be behind Wayland Baptist after twice being felled by the Pioneers in the tourney and have to hope their earlier-in-the-season series wins over WBU and USAO gives them some postseason potential credibility. The outlook isn’t brilliant at all for mighty Oklahoma City as the preseason second-ranked team is on the ropes after going 1-2 in the SAC tournament. Statistically the Stars are just as good as anyone in the conference, but their overall record doesn’t show it.

Entering the rankings for the first time this season are the Campbellsville Tigers. CU dominated Lindsey Wilson in the Mid-South Conference Tournament to earn the league’s automatic bid and may have ended the Blue Raiders season in doing so. Like Oklahoma City, LWC was a top 10 team early this season and looked like a national title contender. However, despite their talent and experience, the Raiders’ 2016 spring was extremely unpredictable. They had wins against a number of the top NAIA teams but also had unexpected losses against clubs they should have dispatched.

Their biggest obstacle of the season was Campbellsville. Five times the teams faced off with the Tigers earning the win in each of the contests. Based on their body of work, LWC should get a phone call when the NAIA opening round is revealed.

With 20 losses, Keiser was a club which needed to make a big statement to alleviate any doubt they deserved an extended postseason invitation. They did that and much, much more.

The Seahawks manhandled their conference foes, scoring 15, 14, 15 and 13 runs to win their first Sun Conference Tournament Champions and earn the league’s automatic bid. After earning the conference’s player of the year honor to kick off the tournament, Keivan Berges went 12-for-17 with five walks to add to his already impressive offensive numbers. Berger is on the short short list of candidates for the NAIA Player of the Year and could increase his odds with another strong showing in the NAIA opening round.

The reigning national champs are looking too legit to quit as they regular season ends. In their final seven games of the season Lewis-Clark State only allowed two runs. Corban University lost 7-0, 4-1, 3-1, 9-0 and 7-0 to the Warriors, and British Columbia and the College of Idaho were also held scoreless by LCSU’s stout pitching staff.  With the wins the Warriors will now wait to the see who they will play in the NAIA World Series. As the host the Warriors earn an automatic seat at the tournament table; however the way they’re playing as of late, it would only be a matter of time before they earned the invite anyway.

For a number of the top teams the regular season and conference tournament has already concluded. With that, six of the top 10 teams didn’t take to the diamond which made for a relatively quiet week in the Top 25. Nevertheless, that doesn’t mean there was nothing to note around the Division.

St. Scholastica looked absolutely divine last week as they went 6-0, which included a pair of wins over St. Thomas. With the wins the Saints entered the Top 25 for the first time this season. Until last week their postseason chances jumped from good to great and takes the pressure off their performance in the Upper Midwest Athletic Conference tournament. Even if CSS were to crash and burn they should still get their name called when at-large bids are announced. The only question now is if another team will steal a postseason dance ticket by usurping the UMAC crown from the Saints.

Another northern team that had an outstanding week was UW La Crosse. The Eagles, fresh of their series win over rival UW Whitewater the week before, won three of four over UW Stevens Point. ULL finished the regular season 31-8, 18-2 in the WIAC and will face UW Oshkosh in the opening round of the conference tournament. In that game the Eagles’ Taylor Kohlwey will be looking to extended his hitting streak to 43 games. When he went 2-for-4 in the finale against the Pointers he extended his steak to 42 which is tied for fourth all time in NCAA D-III history. Nevertheless, Kohlwey shouldn’t have too much pressure to keep his streak going, at least on yet. He still has quite a way to match the all time record of 60 games, set by Damian Costantino of Salve Regina in 2003.

Cortland State had an impressive week, which narrowed the distance between them and the No. 1 position they held most of the season. The Dragons won their sixth consecutive SUNYAC crown as they defeated Oswego, 3-1, in a battle of top 10 teams. Cortland earned the league’s automatic bid, but the Lakers should feel extremely confident that they’ll be playing again soon once they get an at-large bid.

Also continuing to win are the La Roche Redhawks. The Allegheny Mountain Collegiate Conference regular season champs added two big wins as they nipped both Frostburg State and Otterbein as they continued to add to their school record win total. Currently at 32-8, the Redhawks are all but assured an invitation to the NCAA postseason, and will be looking to solidify their status as a national title contender and increase their seeding when they host the AMCC tournament.

It’s impossible to heap enough accolades on senior pitcher Tanner Wilt. In 64 2/3 innings he’s only allowed 38 hits while striking out more than twice as many batters with 86 strikeouts. He’s thrown three complete games and has the ability and moxie to earn a win for La Roche against any opponent they may face going forward.